Now that CNN+ is well on its way to crashing and burning, perhaps the network can consider launching CNN-.

Instead of the $5.99 a month for CNN+ and its increased content, for $6.95 a month, CNN could ensure you have no access to any of its programming. The network would take the channel off your cable lineup. It could delete the app from the phone for you. When you walk through the airport, face ID technology could recognize you and automatically change the channel on the terminal’s TVs to ESPN.

Perhaps that last part would require a bit of maturation in terms of the technology necessary — but whatever the case, CNN- would be a more viable business plan than CNN+, which asks viewers to pay for a streamed programming annex for a channel they weren’t watching anyway.

The early numbers from CNN+ are horrible enough that the company is already prepping for layoffs.

(The effects of CNN’s fake news peddling seem to be finally coming home to roost. Here at The Western Journal, we make sure that America knows all about the network’s skewed reporting — and we’ll keep on doing it, no matter how few people are watching. You can help us keep the mainstream media honest by subscribing.)

Here, for example, from an industry insider, is where the Fox Weather app appeared in the rankings in the Apple App Store after the Fox Weather streaming channel debuted in the fall. The app was at the top of the chart: 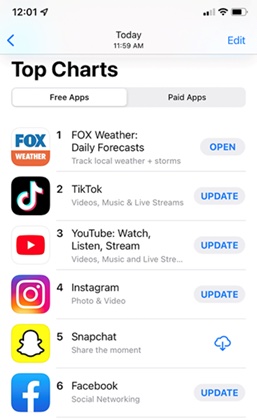 And here was CNN’s app from the weekend, after the CNN+ rollout, stuck in 166th place. 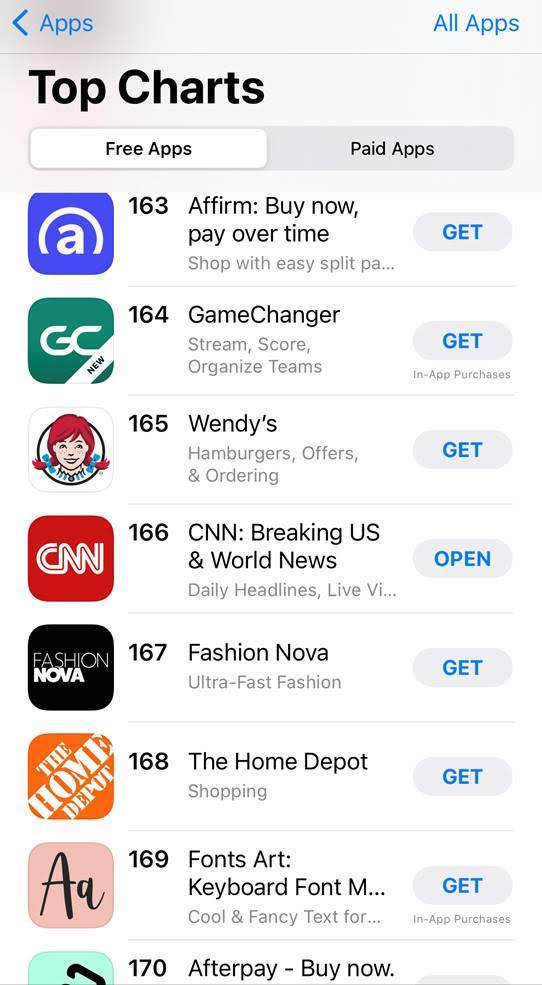 It’s worth noting, too, that if you want to stream CNN+ you need the app, which means other users who might not intend to use the app for CNN+ are also downloading it, increasing its uptake.

Even with that, it’s right in between Wendy’s and Fashion Nova.

Just days after the service launch, Fox Business’ Charles Gasparino wrote on Twitter: “@CNNplus employees bracing for layoffs possibly as soon as May amid projections of lackluster sales of new streaming channel; CNN employees say new streaming channel could be merged into larger @discoveryplus as early as May unless subscriptions pick up.”

You can understand why, given the fact CNN signed Chris Wallace to a contract — presumably not a small one — for a show on the streaming service. Now, the app that streams it is losing out to a fast-food chain’s app and 164 others, as well.

“From a systems standpoint, it rolled out fine,” Gasparino told Fox Business Network host Neil Cavuto last week. “There were no major glitches. Employees were given huge kudos.”

“They were pretty satisfied with the technical rollout. The problem is the subscriptions … No one knows exactly how many people have signed up for this, despite spending millions of dollars on advertising.”

Gasparino also noted that the app is “way at the bottom.”

“You would think CNN might have gotten a bump if CNN+ had a really nice debut, and it looks like they didn’t.”

And there’s another problem — the fact CNN’s new owner, Discovery, wants to move back to a more news-centric format instead of punditry. For the most part, CNN+ doesn’t lend itself to the hard news format, given that’s what CNN is supposed to be for.

However, CNN’s head of strategic communications insisted things were all right at CNN+ in a response to Gasparino.

For the record, we are VERY happy with the launch of CNN+ and are only bracing for a long run of success.

“For the record, we are VERY happy with the launch of CNN+ and are only bracing for a long run of success,” CNN’s Matt Dornic said in the tweet.