Ottawa police have been going from truck to truck, passing out flyers to Freedom Convoy protesters which demand they vacate the demonstration zone immediately or face arrest and criminal charges.

“You must leave the area now,” reads the notice. “Anyone blocking streets, or assisting others in the blocking [of] streets, are committing a criminal offence and you may be arrested,” according to the Wall Street Journal.

Apparently Ottawa police are handing out this notice in Ottawa. pic.twitter.com/m3V1JGeg9c

The notice is an escalation of law-enforcement efforts as the protest against vaccine mandates and social restrictions enters its 20th day. The move comes after Prime Minister Justin Trudeau invoked emergency powers this week aimed at ending the demonstrations.

Ottawa police, in its notice, said that with the new powers made available under the federal emergency order, it is now illegal for new protesters or their supporters to enter downtown Ottawa and join the demonstration. Police also said drivers’ licenses could be revoked, per a separate emergency order from the province of Ontario. -WSJ

Earlier in the day we noted that 13 demonstrators involved in an ‘Coutts blockade‘ were arrested, however today’s order is officially warning of mass arrests. 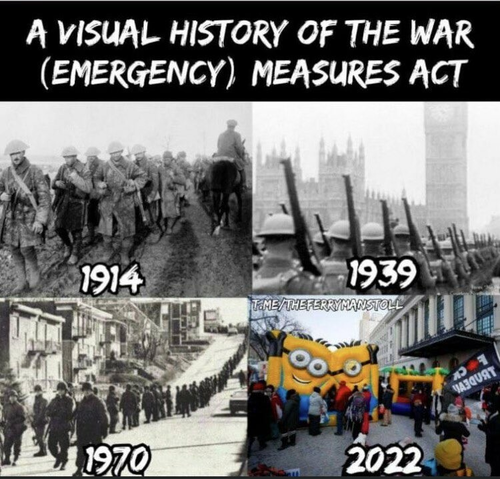 Trudeau’s orders, aimed in part at cutting off funds to protesters, have a wider scope than previously reported – which is “forcing portfolio managers and securities firms to take a harder look at who they are doing business with,” according to Bloomberg.

The new rules make demands of a broad list of entities — including banks, investment firms, credit unions, loan companies, securities dealers, fundraising platforms, insurance companies and fraternal benefit societies. They must determine whether they’re in “possession or control of property” of a person who’s attending an illegal protest or providing supplies to demonstrators, according to orders published by the government late Tuesday night.

If they find such a person in their customer list, they must freeze their accounts and report it to the Royal Canadian Mounted Police or Canada’s intelligence service, the regulations say. Any suspicious transactions must also be reported to the country’s anti-money-laundering agency, known as Fintrac. -Bloomberg

It's not just banks.

Canada's new dragnet, will encompass basically every part of the financial system (including securities dealers) in order to cut off the truckers from funding. https://t.co/YyQrzmjZAG pic.twitter.com/kIuLpNl7B7

“I think this caught everyone off guard last night when it was released,” said Purpose Investments Inc. CIO Greg Taylor on Bloomberg TV. “There’s a lot of questions right now in figuring out who we’re targeting, what do we have to look at.”