Update (2000ET): The House of Representatives is set to debate and then vote on President Biden’s $1.75 trillion Build Back Better Act tonight, just hours after the Congressional Budget Office found that it will add more than $350 billion to the budget deficit – a determination which contradicts the White House’s longstanding claim that the bill is ‘paid for.’ 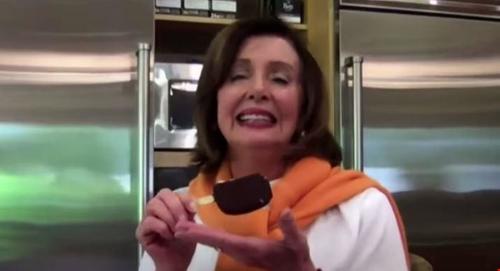 The CBO found that the draft legislation contains $1.636 trillion in spending, and $1.269 trillion in revenue over 10 years, adding $367 billion to the US deficit over that period.

House speaker Nancy Pelosi sent a letter to fellow Democrats on Thursday advising them that they would be receiving an “updated chart from the White House, reflecting the revised numbers” from the CBO, adding that a vote would take place Thursday night “so that we can pass this legislation and achieve President Biden’s vision to Build Back Better!”

Of course, BBB passing the house was more or less a foregone conclusion given its broad support in the chamber. If House Republicans are united in opposition, Democrats can afford to lose three votes and still pass the bill.

What’s in Build Back Better for health care

The big question now is whether moderate Senate Democrats Joe Manchin (WV) and Kyrsten Sinema (AZ) will support it.  The  (more) fiscally conservative Democrats will make their decision as Republicans hammer the bill for increasing the national debt, as well as its potential to intensify inflation, hinder job growth, and increase government dependency.

A key reason the CBO finds the bill does not pay for itself involves estimates of how much increased tax collection can result from expanding the Internal Revenue Service’s budget. While the White House has projected that increasing the number of enforcement agents at the Internal Revenue Service would yield $400 billion in higher revenue, the CBO does not agree. –Bloomberg

Critics also point to the fact that without sunset provisions, the bill would have actually exceeded $4 trillion, including tax credits for children and low-income workers which will be extended for one year.

And while it will likely pass the House tonight, the final bill is almost certain to be whittled down in the Senate, where Democrats are at the mercy of Manchin and Sinema, who have previously objected to how aspects of the legislation will be funded.

Just as the House Rules Committee cleared Biden’s Build Back Better bill for debate by the full House with first votes on the bill set as early as 19:15EST (with Senator Manchin commenting earlier that he has not decided on whether to vote to proceed to the Build Back Better Bill), moments ago the CBO finally released its score of Biden’s bill and, to nobody’s surprise, it finds that contrary to what the Democrats asserted (and then un-asserted), that the bill would not fully pay for itself.

Instead, the CBO estimates that enacting this legislation would result in a net increase in the deficit totaling $367 billion over the 2022-2031 period, as a result of an additional $1.636 trillion in additional spending… 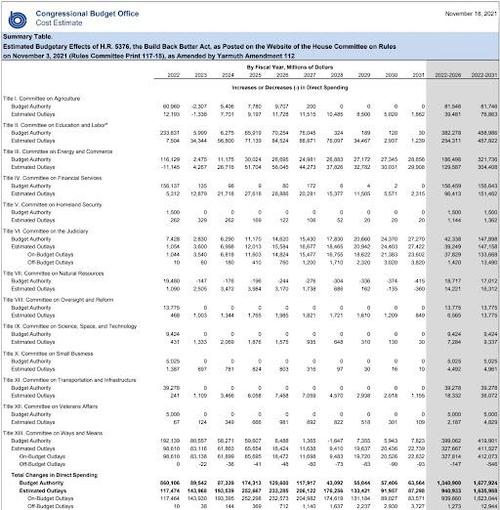 … offset by just $1.269 trillion in revenue (which however the CBO notes does not count any additional revenue that may be generated by additional funding for tax enforcement). 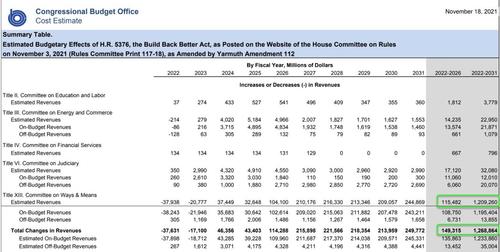 The massive surge in revenues from Ways and Means comes almost entirely from one section: “Responsibly Funding Our Priorities” (which conjures up an additional $1 trillion of revenues from 2026-2031, dramatically easing the ‘cost’ of the bill)… 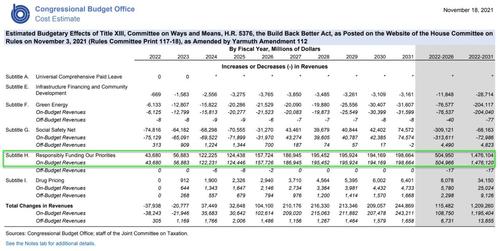 That “Responsibly Funding Our Priorities” Section can be read in full here (Spoiler Alert – that’s where all the Tax Reform gotchas are).

As Mike Shedlock notes, the 10-year lie is that Progressives say the front-loaded benefits will expire. Meanwhile they pledge to do everything in their power to ensure they don’t.

History shows that government entitlement programs only get bigger, they don’t expire.

Nor did the CBO look at ancillary costs such as inflation.

Earlier in the week, the Biden administration began preparing lawmakers for a ‘disappointing estimate,’ and told them to “disregard” the assessment according to the New York Times.

Hilariously, at just the same time as the CBO revised its long-awaited score, Janet Yellen – knowing how ugly it would look when the CBO scored that the Democrats lied – issued a statement saying that “the combination of CBO’s scores over the last week, the Joint Committee on Taxation estimates, and Treasury analysis, make it clear that Build Back Better is fully paid for, and in fact will reduce our nation’s debt over time by generating more than $2 trillion through reforms that ask the wealthiest Americans and large corporations to pay their fair share.”

The wildcard? Yellen’s estimate that the IRS will recoup “at least $400 billion in additional revenue” from high-earners to plug the hole.

A particularly salient aspect of the revenue raised by the legislation is a historic investment in the IRS to crack down on high-earners who avoid paying the taxes that they owe, which Treasury estimates would generate at least $400 billion in additional revenue.

The CBO somewhat agrees with this hypothetical wildcard which can not be modeled out and instead has to be taken as faith, which is why the CBO did not account for it, but it does say that its deficit estimates do not account for the $207 billion in IRS “savings”, meaning CBO’s effective estimate is $160 billion in new deficits.

Of course, in the end all of this is just optics and the CBO score won’t have any impact, with the Bill sure to pass the House and then it will be up to the moderate Democrats in the Senate to determine if it becomes law.

Now let’s see what moderate Senate Democrats Joe Manchin and Kyrsten Sinema have to say about it.