It was just last June when we asked if “ESG will trigger energy hyperinflation“, explaining that the progressives’ ESG agenda, “is unwinding the shale oil revolution. As recent events at Exxon and Shell have shown, the pressure on oil companies to reduce oil and gas exploration and adapt their business models has increased significantly over the past few months” (incidentally the answer to our rhetorical question was “yes”).

We added that “ESG is a negative supply shock that internalizes the climate cost of the production of goods and services. This negative supply shock will be inflationary until technological progress absorbs these costs. That could take years.  Moreover in Europe, it could garner enough of political support to justify a more aggressive fiscal policy despite the constraints at the German or EU levels.”

Meanwhile, the impact of ESG on oil companies has been to depress Capex spending to the lowest level in decades, leaving the energy sector entirely unprepared for any energy price spike, as it simply did not have the capacity to pump as much oil as may be needed.

And while the White House, and especially the ultra-progressive wing of the US socialist party was delighted with the slow, steady destruction of the energy sector, whose profit contribution to the S&P had collapsed to the lowest on record… 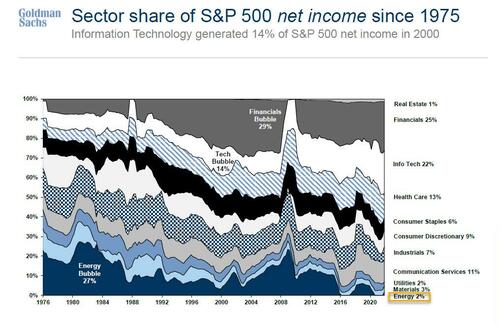 … now that gas prices are the highest on record and the Biden administration is flailing, its approval rating crushed by soaring gas prices and desperately pointing the finger at Putin or any other feces that will stick to the wall, suddenly the president is going for a full U-turn and hoping that everyone has been sufficiently neuralized to forget that on the very first day of his administration, the 79 year old president ordered the closure of the Keystone XL pipeline (in a hilariously titled Executive Order called “Executive Order on Protecting Public Health and the Environment and Restoring Science to Tackle the Climate Crisis“) and froze new drilling leases while pushing for disastrous initiatives that centered on clean energy.

So fast forward to today when ignoring over one year of catastrophic policies, the U.S. State Department’s senior energy security adviser Amos Hochstein – seeing the freefall in White House approval ratings – turned that tables hoping that most Americans are idiots instead of only half, and said that shale companies choosing not to reinvest massive profits into higher production growth at a time of war is “appalling.”

Hammered by policies that discourage evil investments boosting “fossil fuel” output, and under pressure from activist investors to boost cash flows after a decade of weak returns, many publicly traded explorers are limiting production growth to no more than 5%. But that is suddenly at odds with the Biden administration’s efforts to curb soaring inflation and energy prices at home.

So after a year of trying to defang domestic energy companies, the White House – whose Fed Vice Chair candidate Sarah Bloom Raskin even went so far as suggesting to starve energy companies of capital – is now asking producers to raise oil supply to replace Russian crude flows after Biden banned oil imports from the country.

In other words, while yesterday it was Putin’s fault, now it is the fault of shale companies according to an administration that will always find blame anywhere it looks except its own devastating policies.

Shale producers are “out there saying they can’t produce more because their financiers are not allowing them to,” Amos Hochstein said in an interview at CERAWeek by S&P Global in Houston Wednesday. “I find that to be appalling. We’re in the middle of a war, consumers are paying, the American economy is paying and the profits from $130 oil or $120 oil should be reinvested back in the United States.”

Actually, Amos, if the S in USA stood for socialist, you might have some grounds for that idiotic statement. However, as long as the country is capitalist – and last time we checked it still was – and as long as the government is Democrat (which it will be until November’s landslide) and seeking to bankrupt the very companies that it now so desperately needs, such appeals are moronic at best. Oh, and last time we checked, it was the Biden family that is at war – the same family whose “brilliant” scion, Hunter, once advised Ukraine on its energy policies – not the country. So maybe the Biden family can reinvest some of its Ukraine profits into a war that it so desires.

Amos’ socialist appeals aside, independent oil producers remain disinclined to invest unless the administration takes steps to correct its anti-fossil fuel environment that raises their cost of capital (which won’t happen, especially with midterm elections coming up). They have asked Biden to throw his weight behind the sector, by reopening federal lease sales, backing pipelines and speeding up liquefied natural gas export permits. So far, nothing but silence.

“There’s this notion out there in the media and elsewhere that the administration is somehow blocking the industry from producing more,” Hochstein said. “That is just not true.”

Actually it is and even thought Biden himself recently said “it’s simply not true that my administration or policies are holding back domestic energy production”, the following thread by Drew Holden explains why the president is lying.

President Biden recently said “it’s simply not true that my administration or policies are holding back domestic energy production.”

I figure the fact checkers likely won’t touch this one, so I did the homework.

But never let truth stand in the way of a flailing regime which is so desperate it sent not one but two of its henchmen to the CERAWeek S&P global energy conference in Houston, where in addition to Hochstein, the top U.S. energy official openly called on oil and natural gas producers to boost supply.

“We are on a war footing,” Energy Secretary Jennifer Granholm told a packed ballroom at the CERAWeek conference on Wednesday.

“We are in an emergency, and we have to responsibly increase short-term supply where we can right now to stabilize the market and to minimize harm to American families,” Granholm said.

In a desperate attempt to appease a sector that the Biden admin was on true “war footing” against for the better part of a year, Granholm offered an olive branch to the industry that President Joe Biden once shunned, saying the country is “eternally grateful” to oil and gas companies for powering the nation for the past century — and hopes they will continue doing so for the next 100 years with zero-carbon technology.

Her comments come after oil executives at the biggest energy summit in the Americas spent the week criticizing the White House for asking OPEC countries to raise output, rather than domestic producers. The largest independent shale companies have said they won’t accelerate growth without long-term support from Biden, even as oil prices surge to the highest levels since 2014.

But for that to happen, the loudest democrat mouths, AOC and her gal pals, would need to be shut up, and that just won’t happen without the Democrat party splitting in two: one merely centrist socialist, and one radical communist faction.

“Right now, we need oil and gas production to rise to meet current demand,” Granholm said, adding that boosting short-term oil supplies isn’t at odds with the administration’s commitment to clean energy. “We can walk and chew gum at the same time,” she said… although she may want to check if that is also true for her boss.

Finally, as OilPrice explains, even if the US shale sector decides on a truce with an administration that would have gladly watched it crash and burn, it still can’t replace Russian oil in the short term as commodity intelligence firm Kpler said on Tuesday.

But U.S. shale will not be able to fill the gap over the next few months, despite its flexibility and reactivity to market conditions, Alex Andlauer, Senior Global Energy Analyst at Kpler, notes. A lack of equipment is the key reason why the U.S. shale patch cannot replace the loss of Russian crude, Andlauer added.

“If there had been no shortage in workers, trucks, sand and completions equipment, the upside for June (three months process) would have been small anyway, at around +130 kbd, or less than 10% of what we expect Russian crude exports could lose next month,” he wrote.

Shale executives also think the U.S. cannot offset lost Russian barrels. Scott Sheffield, chief executive at Pioneer Natural Resources, the biggest oil producer in the Permian, says U.S. producers will not be able to replace Russian oil this year. In the event of a Russian embargo—which Sheffield supports—oil could jump to $150 and even $200 per barrel, the executive said in an interview with the Financial Times last week.

In short, the Biden admin will have to be waving the neuralizer a whole lot more to make everyone forget that the energy hyperinflation observed today is just as much its fault as it is due to the war in the Ukraine. And speaking of forgetting, maybe it can also erase the memories of all those “81 million” voters who have put America in the worst stagflationary shock since the 1970s energy  crisis. 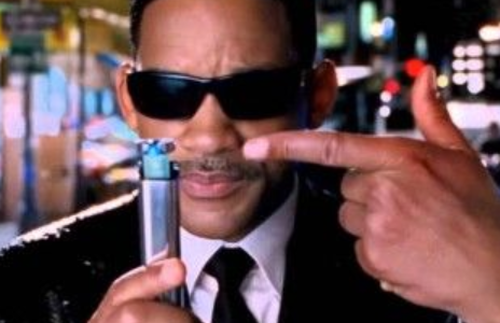