This past weekend Jake Tapper spoke to White House Press Secretary Jen Psaki about inflation and the effects of rising prices in the U.S.

Part of their discussion was prompted by White House Chief of Staff Ron Klain re-tweeting a Tweet from days prior saying that rising prices and inflation were “high class problems”.

“Most of the economic problems we’re facing (inflation, supply chains, etc.) are high class problems,” Jason Furman wrote on October 13th. Klain re-tweeted his tweet with two fingers pointing down at the original tweet and simply said: “This”.

When Psaki took to Tapper’s show on CNN to try and defend the White House Chief of Staff’s response, she tried to make the case that rising prices were good because it meant more people were buying things. And, like everyone else in the world, she blamed Covid.

Psaki responded by saying: “The fact is that the unemployment rate is half of what it was about a year ago.”

“More people have jobs, more people are buying goods, that’s increasing demand. That’s a good thing. At the same time, we know supply is low because we’re coming out of the pandemic,” Psaki answers. 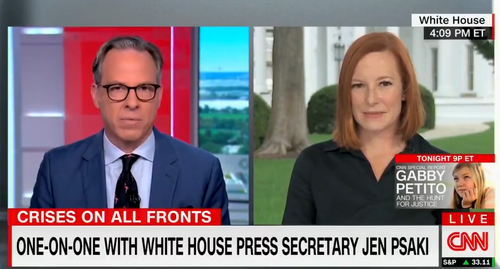 “What people should know is inflation is going to come down next year, economists have said that, they’re all projecting that,” she continued.

“Chief of Staff Ron Klain, back when he was a private citizen, went after the Trump White House for efforts to dismiss price rises,” Tapper continued. “Why did Ron Klain think rising prices were a serious concern under Trump but not under Biden?”

“I can tell you from sitting in meetings with Ron Klain, he is obsessed with lowering costs for the American people,” Psaki responded.

You can watch the full exchange here: