Update (1720ET):  Moderate Democrat Sen. Joe Manchin of West Virginia has issued a statement over his refusal to back his party’s $3.5 trillion spending plan, calling “trillions more on new and expanded government programs” the “definition of fiscal insanity” when we “can’t even pay for the essential social programs, like Social Security.” 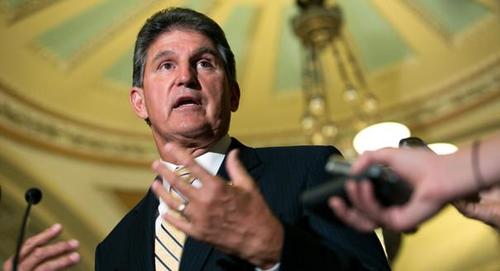 Full statement below (emphasis ours):

“Every Member of Congress has a solemn duty to vote for what they believe is best for the country and the American people, not their party. Respectfully, as I have said for months, I can’t support $3.5 trillion more in spending when we have already spent $5.4 trillion since last March. At some point, all of us, regardless of party must ask the simple question — how much is enough?

What I have made clear to the President and Democratic leaders is that spending trillions more on new and expanded government programs, when we can’t even pay for the essential social programs, like Social Security and Medicare, is the definition of fiscal insanity. Suggesting that spending trillions more will not have an impact on inflation ignores the everyday reality that America’s families continue pay an unavoidable inflation tax. Proposing a historic expansion of social programs while ignoring the fact we are not in a recession and that millions of jobs remain open will only feed a dysfunction that could weaken our economic recovery. This is the shared reality we all now face, and it is this reality that must shape the future decisions that we, as elected leaders, must make.

Since the beginning of this reconciliation debate, I have been consistent in my belief that any expansion of social programs must be targeted to those in need, not expanded beyond what is fiscally possible. Our tax code should be reformed to fix the flaws of the 2017 tax bill and ensure everyone pays their fair share but it should not weaken our global competitiveness or the ability of millions of small businesses to compete with the Amazons of the world. Overall, the amount we spend now must be balanced with what we need and can afford — not designed to reengineer the social and economic fabric of this nation or vengefully tax for the sake of wishful spending.

In August, I recommended we take a strategic pause to provide time to develop the right policies and to continue to monitor how the pandemic and economic factors are affecting our nation’s fiscal situation before we spend more. Throughout September, I have made it clear to all those who would listen the need to means test any new social programs so that we are helping those who need it the most, not spend for the sake spending.

While I am hopeful that common ground can be found that would result in another historic investment in our nation, I cannot — and will not – support trillions in spending or an all or nothing approach that ignores the brutal fiscal reality our nation faces. There is a better way and I believe we can find it if we are willing to continue to negotiate in good faith.

As expected, the Senate is set to kick the can down the road on funding the government past a Thursday night deadline. According to Senate Majority Leader Chuck Schumer (D-NY), the chamber will vote today or tomorrow on a “clean” continuing resolution (CR) which will avert a shutdown until December 3. 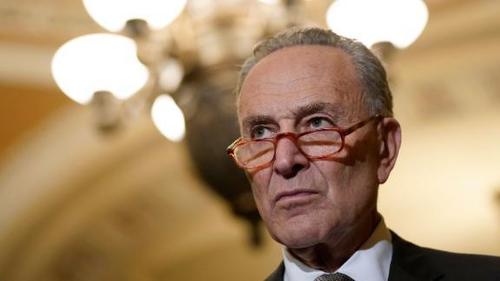 That said, as Goldman’s Alec Phillips notes, by separating the continuing resolution from a debt ceiling vote, Democrats are giving up leverage in the hopes of passing both at the same time.

The decision to set the CR deadline for Dec. 3 lowers the risks around the debt limit slightly compared to the alternative, which would have been a mid-Oct. deadline. In light of the Treasury’s projection that the debt limit will need to be raised by Oct. 18, the two deadlines are now separate and congressional Democrats cannot use the next spending deadline to try to force a bipartisan debt vote to suspend the debt limit.

Of note, while Treasury Secretary Janet Yellen predicted the ‘drop-dead’ date on the debt ceiling will be October 18, the Congressional Budget Office on Wednesday estimated it would most likely happen towards the end of October, or early November.

Meanwhile in the House, Speaker Nancy Pelosi (D-CA) is expected to cancel a Thursday vote on the $1 trillion bipartisan infrastructure plan (BIF), because she doesn’t have the votes to pass it. According to The Hill, more than two-dozen progressive Democrats are planning to vote “no” on the BIF because it’s been separated from the $3.5  trillion spending package. 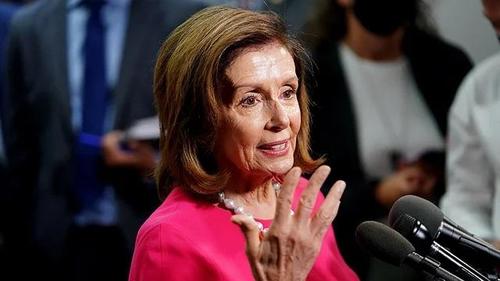 “They will not pass it on Thursday. Enough of the House members understand that they would be gutting the Build Back Better agenda,” one Democratic lawmaker told the outlet, adding “Nancy will pull it. We’re pretty sure she won’t put it up for a vote. She’ll meet with the moderates and she’ll say, ‘Listen, I don’t put these things up when the votes aren’t there. It doesn’t help your cause to see it fail, it doesn’t help the president to see it fail.”

Pelosi had promised the bill would receive a vote on Monday and then delayed the vote to Thursday.

On Wednesday, she said the vote was still scheduled but acknowledged that as Speaker, she could shift the schedule. She also reiterated that she will not bring a bill to the floor that does not have the votes to pass.

Pelosi said Wednesday that she won’t move one bill without the other.

“We’re doing it simultaneously,” she said.

Progressives have been pressing for two centrist Democratic senators, Joe Manchin (W.Va.) and Kyrsten Sinema (Ariz.), to specify what they can support in the larger social spending plan, which Democrats want to move under budget reconciliation rules. -The Hill

The Progressive pushback was backed by Senate Budget Chairman Bernie Sanders (I-VT), who warned progressives in a Tuesday conference call that they will completely lose their leverage if they let the $1 trillion package pass.

“There was an agreement in terms of a dual track and that I’m not happy to see that agreement reneged on, and second of all that we’ll lose our leverage in passing a strong reconciliation bill here if they were to pass the infrastructure bill,” said Sanders to House progressives.