As the far more mild, yet hyper-transmissible Omicron strain continues to spread like wildfire, official figures for new infections are undoubtedly low.

Between a shortage of home test kits and the fact that Omicron symptoms have been relegated to ‘common cold’ or asytmptomatic for most people, the real number is undoubtedly ‘significantly higher,’ according to Boston.com.

While Massachusetts reported a record 27,612 cases last Wednesday, samples from the Boston area’s wastewater collected last week suggest that the official count is nowhere near the actual number of Covid-19 infections.

Biobot Analytics, the Cambridge-based company that collects the wastewater data, said Thursday that “undercounting is now more substantial than ever.”

In fact, since early December, the Massachusetts Water Resources Authority has had to quintuple the y-axis on their chart to capture the exponential spike, which now dwarfs the previous surges in the spring of 2020 and last winter. -Boston.com 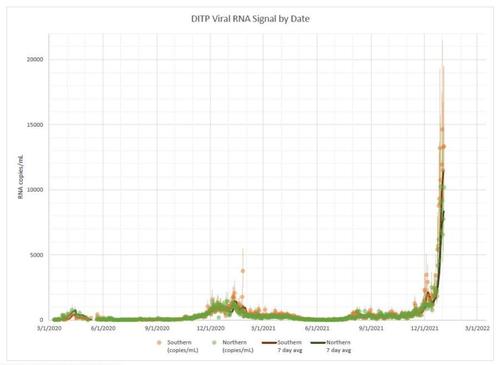 Biobot chief of staff Casey McGinley told Boston.com that the latest data suggests infections in Boston and its suburbs are “much higher than it’s ever been,” adding “We can’t say definitively what percentage of all infected people are getting counted as cases, but wastewater data does support that this percentage has gotten much smaller in recent days.”

On Thursday, Biobot Analytics tweeted: “We’ve never counted every infected person as a case, but [wastewater] data show that the undercounting is now more substantial than ever.”

The WC ratio has risen at MWRA. This means a smaller fraction of people who are infected are getting counted as cases. We’ve never counted every infected person as a case, but WW data show that the undercounting is now more substantial than ever. 3/6 pic.twitter.com/kzxcyt4NKh

The company says it’s seeing “similar results across the country,” which suggests that the 500K or so official new Covid-19 cases  is massively undercounting actual cases.

This is a good thing, as it suggests that many of the underreported cases may be asymptomatic.

[edit: and a great point in the comments]:

Of course, with this kind of spread, people who would normally become gravely ill or die from any bad cold are going to clog up hospitals for at least the next few weeks.

“If you are looking to get a hip replacement, if you are have some other procedure that has been bothering you but it’s not an emergency, these are getting pushed back and we are seeing the ripple effects on everyone,” said Boston Mayor Michelle Wu in a Wednesday press conference.

According to Biobot, the bottom line is that “Even if a smaller percent of people with Omicron have symptoms, there are just so many more infected people that hospitals will face a bad crunch in the coming weeks…”

For a look at what’s likely to come, check out Dr. John Campbell’s Omicron synopsis from Saturday: