If the jury in the Kyle Rittenhouse trial weren’t already aware of the high-stakes politics surrounding their deliberations, Judge Bruce Schroeder has made it absolutely clear.

In his instructions on Monday, Schroeder emphasized that the jury must make its decision on its own, without interference from anywhere — especially not from President Joe Biden.

“You will pay no heed to the opinions of anyone — even the president of the United States or the president before him,” Schroeder said.

The video of that part of Schroer’s instructions can be seen here.

To anyone who’s followed the Rittenhouse case, it’s obvious why Schroeder felt that instruction was necessary — and it wasn’t because of Donald Trump

The Aug. 25, 2020, shooting was a national story from the moment it took place, with the mainstream media, leftist activists and major figures in the Democratic Party rushing to paint the then-17-year-old Rittenhouse as a savage racist hellbent on causing trouble among demonstrators protesting a police shooting of a black man in Kenosha, Wisconsin.

At an Aug. 30, 2020, news briefing, in fact, then-President Trump was asked if he would “condemn the actions of vigilantes like Kyle Rittenhouse.”

Trump has rarely been accused of being overly judicial in his choice of words, but this time, his answer was dead on.

“We’re looking at all of it. And that was an interesting situation,” he said.

“You saw the same tape as I saw. And he was trying to get away from them, I guess, it looks like. And he fell, and then they very violently attacked him. And it was something that we’re looking at right now, and it’s under investigation.”

In other words, after giving a brief summary of what it “looks like” on video seen by virtually the entire country, Trump concluded only that “it’s under investigation.”

Unfortunately for the cause of the American system of justice, Trump’s then-Democratic opponent Joe Biden and his presidential campaign showed no such restraint.

In an Aug. 27 interview with CNN, Biden acknowledged his own ignorance about the case, but immediately suggested through his response to a question from Anderson Cooper that Rittenhouse was a “militia” member who had gone to Kenosha with criminal intent — and, of course, Biden then attacked Trump for not attacking “white supremacy.”

And that was no slip of the tongue in the middle of a television interview.

In a Twitter post published after the first Trump-Biden debate (a debacle moderated by a disastrous Chris Wallace of Fox News), Biden used Rittenhouse’s image in a video, again attacking Trump for allegedly failing to denounce “white supremacists.” 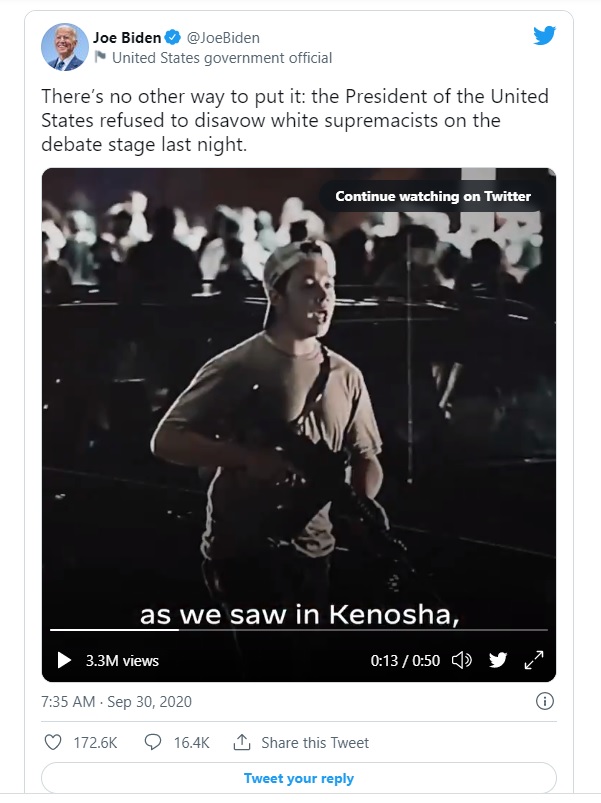 Nothing like a presidential campaign ad to poison a jury pool.

“President Biden don’t know my son whatsoever, and he’s not a white supremacist. He’s not a racist. And he did that for the votes.”

“And I was so angry for a while at him and what he did to my son. He defamed him,” Rittenhouse said.

Fair-minded Americans should be disgusted at the political posturing that’s surrounded the Rittenhouse case, as left-wing politicians and media outlets that normally drip with sympathy for criminal defendants howl for the blood of a teenager who defended himself while caught in a potentially deadly situation.

And fair-minded Americans should be praying that those jurors in the case really are immune to the politics outside the courthouse.

To come to a just verdict, they need to disregard everything but the facts of the criminal case and how they apply to Wisconsin self-defense law.

That means disregarding the intense political pressure that’s surrounding the case from the left.

And it especially means disregarding statements from the man now in the White House.