Update (1800ET): Southwest Airlines has had another terrible, horrible, no good, very bad day – as a shortage of workers combined with an air traffic control interruption to bring the total number of canceled flights to nearly 3,100 in four days.

“Crews were struggling to move and you end up in short order with aircraft and crews in the wrong spot,” said EVP Bob Jordan, adding “It’s really difficult to repair and put those things back together.”

Speculation over the actual cause of the cancellations has been rampant on social media – with some pilots refuting claims that they were staging a sickout over vaccination mandates, while COPO Mike Van de Ven told employees on Sunday night that it needs to build more of a “staffing cushion” to deal with unexpected disruptions.

This photo was just sent to me of a grounded Southwest plane flying a Gadsden flag out of the cockpit. The Hero Pilots at Southwest and other Airlines deserve our support. True patriots worthy of the American Freedom Fighter tradition.
Don’t Tread On Me.
God Bless Them 🇺🇸✈️🙏🏻 pic.twitter.com/tAo9pT4Q60

According to Bloomberg, Southwest has hired just half of the 5,500 workers it plans to before year-end, according to CEO-designate Jordan.

The airline has set a Dec. 8 deadline for vaccinations, which the Pilots Union claim “imposes new conditions of employment” and threatens termination.

“What was a minor temporary event for other carriers devastated Southwest Airlines because our operation has become brittle and subject to massive failures under the slightest pressure,” said Casey Murray, president of the Southwest Airlines Pilots Association. “Our pilots are tired and frustrated because our operation is running on empty due to a lack of support from the company.”

Murray denied that the cancellations were due to any sort of pilot protest.

“I can say with certainty that there are no work slowdowns or sickouts either related to the recent mandatory vaccine mandate or otherwise,” he said, adding that under federal law “our union is forbidden from taking job action to resolve labor disputes under these circumstances. SWAPA has not authorized, and will not condone, any job action.”

*SOUTHWEST COO COMMENTS ON CANCELLATIONS IN VIDEO FOR EMPLOYEES

*SOUTHWEST COO: `CANNOT TELL YOU THAT WE ARE OUT OF THE WOODS’

As we noted on Sunday, Southwest airlines canceled nearly 2,000 flights over the weekend – blaming the Federal Aviation Administration (FAA) and inclement weather. 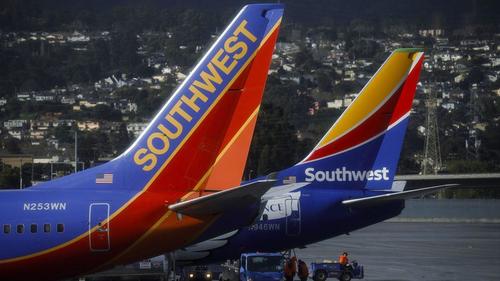 Oddly, no other major airlines had the same issues, while rumors swirled that airline employees had staged coordinated walk-outs (which their unions deny).

This is the single bravest thing I have seen in years. God bless these Pilots. The heroes we need right now 🇺🇸✈️ pic.twitter.com/ZxuRseDoAq

On Monday, Southwest was once again at the top of the cancellation list, according to FlightAware – which lists 356 cancellations as of this writing (23% of the day’s 1,539 total cancellations), prompting Sen. Ron Johnson (R-WI) to tweet: “As a loyal Southwest customer who has been flying safely throughout the pandemic and is utterly opposed to vaccine mandates, I’m asking, stop the madness before more damage is done.” 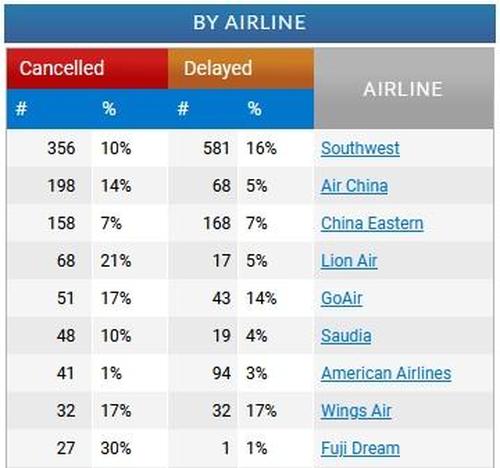 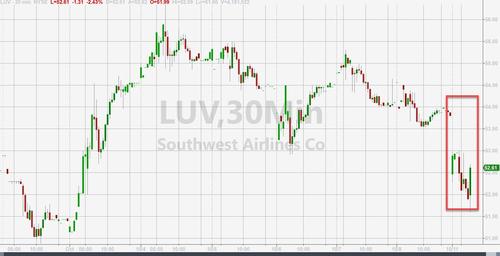 Former US Senator Dr. Ron Paul may be on to something in a Monday op-ed via the Ron Paul Institute, when he calls it a rebellion (emphasis ours)

The incredible cruelty and folly of forced vaccines finally came home to roost. The vaccine mandate backlash has been bubbling just under the surface, but now it has spilled out into the open, threatening to completely derail an already crumbling economy and to obliterate a deeply unpopular US President and Administration.

Seemingly out of nowhere what appears to be a Southwest Airlines rebellion has taken flight this weekend. According to media reports, scores of pilots and other Southwest employees have coordinated the taking of “sick days” to use them up in advance of a Southwest Airlines mandate to get the jab or lose the job. Over Saturday and Sunday more than 2,000 flights have been cancelled, with airports experiencing full-on mayhem.

The Southwest Airlines Pilots Association is suing the airline over the imposed vaccine mandate, bolstering the claim that there is a “sick out” underway among angry Southwest pilots.

The mainstream media is doing its best to keep a lid on the expanding rebellion against the vaccine mandates, and Southwest Airlines itself is blaming the cancellations on bad weather and a lack of air traffic controllers. However, the weather problems that Southwest claims to be experiencing seem unique to that carrier: no other airline (thus far) is reporting such weather-related cancellations. And FAA spokesperson Steve Kulm told USA Today that “No FAA air traffic staffing shortages have been reported since Friday.”

Will other pilots, such as at American Airlines, follow suit? Rumors are circling that this is only the beginning.

Over the past few weeks, thousands of nurses, medical workers, and first responders have either quit or been fired for refusing to receive a medical treatment they do not want or need. The “nursing shortage” that Democrat politicians and the mainstream media had been blaming on “rising Covid cases” has been in reality a man-made disaster of historic proportions. The nursing crisis is not caused by “Covid” – cases have been in decline in the US for weeks. It is caused by the firing of medical personnel who refuse to take the experimental Covid shots.

The stupidity of adopting a policy of firing healthcare workers while at the same time claiming that there is a raging pandemic gripping the country has not been lost on Americans. President Biden’s polling numbers have unsurprisingly been in freefall, with major Democrat candidates like Virginia’s Terry McAuliffe openly complaining that the deeply unpopular Biden is threatening him in a tight race for governor.

While Biden Administration lackeys like Fauci are telling Americans they can’t celebrate Christmas again this year, more and more of America is finished with this “public health” terrorism. Here in Texas, a hundred thousand unmasked Texas A&M fans poured onto the football field on Saturday after a last minute surprise victory over Alabama. In Texas and elsewhere, the Administration is losing the fear factor.

History may record this weekend as the turning point against the Biden Administration’s Covid tyranny. From nurses to pilots to truckers to even Amtrak workers, it appears that America is standing up and saying “enough!” Every one of our fellow citizens standing up on principle to oppose tyranny – facing the loss of their jobs and security – is owed a debt of gratitude by all who love liberty. Let’s hope that the peaceful rebellion continues to grow!