Streaming music service Spotify is in the process of removing Neil Young’s music, depriving tens of fans access to the 76-year-old’s song library on the platform. 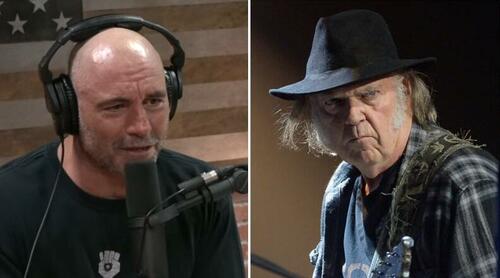 Young, whose biggest hit, “Heart of Gold” came out 50 years ago, threw a temper tantrum earlier in the week over podcaster Joe Rogan, who the aging rocker says was spreading “fake information” about vaccines.

In an email to Warner Records, Young said Spotify “has a responsibility to mitigate the spread of misinformation on its platform,” adding “I want you to let Spotify know immediately TODAY that I want all my music off their platform.”

Young’s letter was a response to a December podcast in which Rogan interviewed Robert Malone, a controversial virologist who researched messenger RNA vaccines and is now sceptical of them. On the podcast, Malone told Rogan that US hospitals are financially incentivised to falsely report deaths as being caused by coronavirus. Rogan has also on his podcast encouraged “healthy” young people not to get a Covid-19 vaccine. –FT

Rogan notably inked a deal with Spotify in May of 2020 worth more than $100 million. Four months later, Spotify employees threatened to strike unless the company agreed to remove past Rogan podcast episodes with ‘controversial guests,’ and give employees direct editorial oversight over the Joe Rogan Experience podcast. This did not happen.

Now, according to the Wall Street Journal, Young’s music will be no more on the platform.

Neil Young is gonna regret this when his monthly Spotify checks for $1.37 stop rolling in https://t.co/nAyAJ8ayqv