Taiwan says China’s military has upped the threat level against it as People’s Liberation Army (PLA) planes pressed ahead with their largest ever drills surrounding the island, following Thursday’s ultra-provocative launch of eleven ballistic missiles in area waters, some of which were reported to have flown over the island and population of some 23 million.

Days ago Chinese state media said the median line – which forms an unofficial border, the other side of which includes Taiwan-claimed waters – has ceased to exist. Government mouthpiece Global Times had also cast the drills as rehearsal for a “reunification operation”.

For example on Wednesday, just a day after House Speaker Nancy Pelosi arrived in Taipei, GT wrote “the PLA is completely blockading the island demonstrating the Chinese mainland’s absolute control over the Taiwan question.”

According to The Guardian, citing Taiwan officials, “Beijing on Saturday continued some of its largest-ever military drills around Taiwan – exercises seen as practice for a blockade and ultimate invasion of the island.” The publication says further:

Taipei said it observed “multiple” Chinese planes and ships operating in the Taiwan Strait, believing them to be simulating an attack on the self-ruled democracy’s main island.

Over the past days there have been some close-call incidents involving Chinese drone incursions, which have been warned off by Taiwan’s military firing flares, particularly over the Kinmen and Matsu islands.

Taiwan’s military further says it’s in a high state of alert, and that while it doesn’t seek war, it stands ready to respond to aggression accordingly. The defense ministry has condemned China’s ‘no-go’ areas, which have also threatened to upend global trade, as having “seriously damaged the peace”.

China’s CGTN has published a series of maps labeling the reason for PLA military drills in particular zones. In the below, the state outlet captions, “Break the so-called ‘median line’ in the Taiwan Straits.” 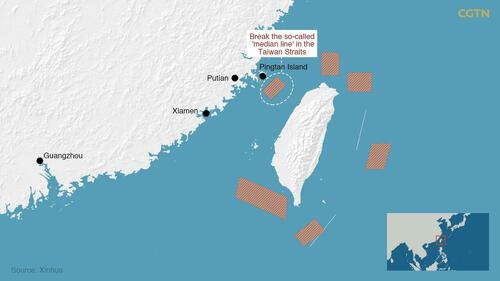 Meanwhile, The Guardian notes that a high level Taiwanese official has died. “News about the drills came as Taiwan’s official media outlet, CNA, reported Ou Yang Li-hsing, the vice-president of the Taiwan defence ministry’s research and development unit, had been found dead in a hotel room after a heart attack,” the report said, and noted, “there were no signs of intrusion to the 57-year-old’s room and that his family said he had a history of cardiac problems.”