While in their unprecedented broadside of sanctions on Russia, the U.S. and Western allies went out of their way to spare Russian energy shipments and keep economies humming and voters warm, the oil market has gone on strike anyway. Acting as if energy were already in the crosshairs of Western sanctions officials, refiners have balked at buying Russian oil and banks are refusing to finance shipments of Russian commodities, the WSJ reports citing traders, oil executives and bankers.

This self-imposed embargo which has effectively halted a majority of Russian oil shipments, threatens to drive up energy prices globally by removing a gusher of oil from a market that was tight even before the Russian invasion of Ukraine. Meanwhile, Russia, waging war and in need of revenue with its financial system in turmoil, is taking extreme steps to convince companies to buy its most precious commodity.

We previously reported that owners of oil tankers had already started to avoid Russian ports because of both the military invasion of Ukraine and apprehension that sanctions for oil could also come soon, and as a result rates for oil tankers on Russian crude routes had exploded as much as nine-fold in the past few days.

But now, amid growing fears they will fall afoul of complex restrictions in different jurisdictions, refiners and banks are balking at purchasing any Russian oil at all, traders and others involved in the market say. Market players also fear that measures that target oil exports directly could land as fighting in Ukraine intensifies.

“This is going to make it very complex to trade with Russia,” Sarah Hunt, a partner at law firm HFW who works with commodities traders, said of the sanctions laid out as of Monday. “These sanctions against Russia will have an incredible effect on global trade and on trade finance.”

Brent-crude futures, the benchmark in international energy markets, rose nearly 8% Tuesday to above $105 a barrel. But in a sign that demand for Russian oil has evaporated, prices for the country’s flagship Urals crude moved in the opposite direction.

On Tuesday, traders offered Urals brent at a record discount of around $15 a barrel below the price of Brent – with the discount at one point hitting as much as $18.60 – and even then not finding buyers. A drop in the price of Espo, a grade of Russian crude popular in Asia, suggests refiners in Japan and South Korea are hitting pause on purchases alongside those in Europe and the U.S. 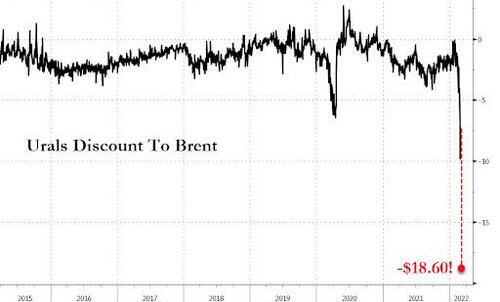 “The market is starting to fail,” a trader at a major commodities trading house told the WSJ, which is a problem because with Russia exporting roughly 5 mmb/d, the oil market – already extremely tight – could find itself in a historic supply shortage in just a few days, and will need massive demand destruction, read much, much higher oil prices, to stabilize as Goldman wrote over the weekend.

Oil trading giants including Vitol and Trafigura hold Russian oil bought under long-term deals. But according to the WSJ, they were unable to sell Tuesday, people familiar with their operations said.

And while for now, Russia is exporting about as much oil as it was on the eve of Thursday’s invasion, those flows, based on sales made before the war, will slow drastically in the coming weeks once cargoes have been delivered, traders and analysts said.

The importance of Russia’s energy industry—exporter of about 7.5% of the world’s oil—to the global economy led Western governments to carve oil and gas out of their sanctions. In cutting some but not all banks from the financial system’s messaging infrastructure, Swift, the U.S. and others left avenues for traders to pay for oil and gas.

As a result of these sanctions, and fears that a full-blown embargo on Russian oil output will soon follow, energy buyers have balked at the prospect of using the existing “loophole” worried that in just a few days they may be stuck with billions in Russian oil they can’t sell. As a result the entire Russian oil supply chain is collapsing.

Which is not to say there are no buyers left: as prices for Russian crude tanked last week, companies in India vacuumed up around seven million barrels of Urals oil, but even there companies are taking steps to limit sanctions risk according to the WSJ.

On Monday, Indian Oil Corp. sent a letter to crude traders stating it would buy Russian oil only if delivery was included, according to a person familiar with the matter and a document seen by The Wall Street Journal. In the document, the Indian refining giant said it would no longer buy two grades of Russian oil, as well as a blend of Kazakh oil, if it had to take responsibility for transporting the oil. This was because some shipping companies are hesitant to load Russian crude.

Russia is responding fast to shore up demand for its oil, a vital source of dollars now the country’s foreign-currency reserves have been frozen by the U.S. and allies.

Companies including state-aligned giant Rosneft have pivoted from offering oil on a so-called FOB basis, in which buyers fix their own vessel and finance and insure the shipment, traders and oil executives say. Instead, they are offering oil on what is known in industry jargon as a CFR basis.

Under this model, Rosneft would use vessels from government-owned Sovcomflot’s fleet and deliver oil to the buyer’s door in return for cash, which means the buyer doesn’t have to worry about transportation, trade finance or insurance.

But buyers are rejecting the proposal, an oil-industry executive and a Middle East oil trader said.

In addition to India, China has also scooped up more Russian Urals, which normally are mostly sold on European markets. Two large tankers, including one chartered by China Petroleum & Chemical, or Sinopec, are en route to the Chinese ports of Ningbo and Zhanjiang and are scheduled to arrive in late March, said Kevin Wright, lead oil analyst at market-intelligence firm Kpler. A Sinopec spokesperson didn’t immediately respond to requests for comment.

Still, traders said China – which today we learned has bought more Iranian oil now than it did before the US sanctions – hasn’t vacuumed up cheap barrels in the way it did when global oil prices crashed at the start of the pandemic, perhaps because Beijing is treading a careful diplomatic line over the war, abstaining on a United Nations vote on condemning the invasion last week. That said, it’s probably only a matter of price before China decides to buy up as much Russian oil as it can.

One challenge facing Rosneft and other producers: Governments including the U.K. and Canada are banning Russian oil tankers. On Monday, one such vessel was forced to cancel an arrival to Scotland after the U.K. instituted its ban. Meanwhile, as noted earlier, many Western shipping companies have grown wary of sailing in the Black Sea to the south of Ukraine, and are contending with a jump in insurance rates for operating near a war zone.

Another emerging complication comes from the banks that grease the wheels of international commerce, and which are refusing to finance Russian commodity deals. Lenders including ING, Société Générale and Credit Suisse and even some Chinese banks aren’t issuing letters of credit, a form of trade finance, for oil and other natural resources from Russia.

The bottom line is that while Russia’s economy will likely be crippled and soon, once this final dollar lifeline stops, the removal of millions of barrels of oil from the market will lead to an exponential surge in oil prices until we hit the infamous “demand destruction” trigger – the price beyond which there is no more demand… and a global stagflation beckons.

In short, this is one giant game of chicken between Russia and the west, where the former is suffering tremendous pain this very moment, and where the latter is still cruising thanks to a buffer of relatively cheap oil which however will run out shortly and once it does, prices will go vertical triggering an even bigger oil crisis than what the US experienced in the mid-1970s.