Another day, another record discount for Russian Urals crude, which was offered at a price more than $22 below spot by oil trader Trafigura and still could find no giant…

… confirmed what we previously observed, namely that the commodity world is splitting in two: a bidless market for Russian oil, and (increasingly) offerless for non-Russian.

This is the key point that JPMorgan’s commodity strategist Natasha Kaneva makes in a research note earlier today, in which she notes that while the US and its allies have so far stopped short of imposing penalties directly on Russian oil and gas, on Tuesday it became increasingly clear that Russian oil is being ostracized. The preliminary Russian crude oil loadings for March revealed a 1 mbd drop in the loadings from the Black Sea ports, 1 mbd drop from the Baltics and 0.5 mbd drop in the Far East.

In addition, there is now also an estimated 2.5 mbd loss in oil products loadings from the Black Sea, for a total loss of 4.5 mbd of Russian crude loands, a stunning amount in a market that was already precariously balanced before the Ukraine war.

Putting that number in context, prior to last week Russia was exporting about 6.5 mbd of oil and oil products, with two-thirds clearing through the now-frozen seaborne market. Out of that, Europe and the US accounted for 4.3 mbd, with Asia and Belarus rounding to 2.2 mbd.

Then echoing what we said yesterday, JPM notes that “as the Russian invasion entered its seventh day on Wednesday, Russian cargoes have become toxic for the majority of the Western trading houses, refineries, utilities, shippers, banks, ports and insurers. As of today, almost 70% of Russian oil is struggling to find buyers.”

It should be underscored here that Russia is not withholding volumes: highlighting the difficulty for Russian producers to sell their oil, nine cargoes of 100 thousand tons each for March loading failed to find buyers on Wednesday, after two prior attempts failed on Monday and Tuesday – which explains why as shown above, Russian benchmark Urals oil is now being offered at a record $20 discount to international benchmark, with no bids:

The reasons include logistics, where a large number of oil tanker owners are taking a caution-first approach until the full picture on sanctions is clear. Big international energy consumers are also mindful about reputational damage if they handle Russian barrels. Some have moral objections.

Meanwhile, signs are growing that things will get worse: as Russia’s invasion into Ukraine is entering a deadly new phase, president  Biden is facing pressure from lawmakers in both parties to completely cut off US imports of Russian oil and gas. In Europe, the conflict has revealed an extreme tension between European energy security and the region’s primary energy supplier, likely leading to a rethink of European energy strategy where a “Russia-free” requirement might be added to the “carbon-free” category.

As sanctions have widened and the shift to energy security takes on an urgent priority, there will likely be ramifications for Russian oil sales into Europe and the US, potentially impacting up to 4.3 mbd.

JPMorgan then repeats what Goldman said over the weekend, arguing that given the supply shock and barring a breakthrough in peace negotiations, an immediate demand destruction is the only way to rebalance the market in the short term.

In practical terms, this translates into two cases for the future of oil prices: an ugly, painful case which however does not crash the global economy, and a potentially devastating, global recession (if not depression) inducing one. This is how JPM lays them out:

And while it may appear a long shot, there are three potential supply relief valves that could act as a suitable rebalancing mechanism, even if all fail to reverse the complete loss of Russian oil.

JPM decides to close somewhat optimistically, and while ignoring the apocalyptic scenario which would see oil spike to levels that helped catalyze the global crisis of 2008 (something we discussed previously in “Shades Of 2008 As Oil Decouples From Everything“), concludes that “the lesson from this century’s financial crises taught us that a policy response will be necessary. There is enough policy space. IEA members, which consist of OECD oil consumers, currently hold emergency stockpiles of 1.5 billion barrels. These volumes do not include commercial oil inventories, which amount to another 2.7 billion barrels (Exhibit 3).” 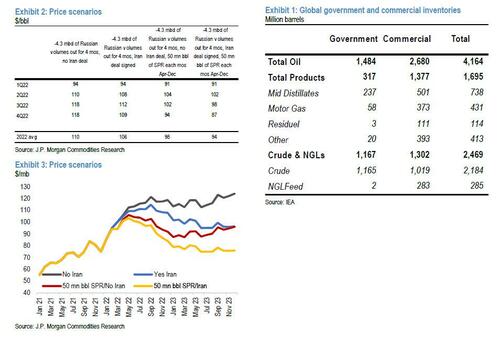 Separately, JPM also believes that somehow US production could be incentivized to grow more than the current 2-3% guidance from the largest E&P operators, “especially if the administration declares the energy crisis a national security problem” although it is unclear how Biden will do that with progressives breathing down his neck and demanding an end to evil fossil fuels, consequences be damned even if it means $10 gasoline.

A similar downbeat view was shared in a note published by Bank of America, dubbed “the economics of $200/bbl oil”…

… in which chief economist Ethan Harris hasn’t quite caught up to the fact that despite “loopholes” left for Russian energy imports, Western buyers have effectively self-imposed a buying embargo on Russian oil. As Harris notes, “the big missing element in the sanctions thus far is that they have little impact on Russian energy exports” which of course is not true, with more than 70% of Russian seaborne oil now shuttered.

As Harris writes next, “the problem is that we have no confidence in predicting what happens next. Russia experts have repeatedly under-estimated how far Putin would go not only in this crisis but also in Russia’s previous incursions into Ukraine. It also appears that both the experts and Putin himself have been surprised by the remarkable resistance from the Ukraine people and the stronger-than-expected NATO response.” And while the BofA economist wonders that perhaps this would cause Putin to look for a face-saving way out of Ukraine, he is very concerned about the opposite “a sharp escalation of the attack with energy sanctions to follow.”

What does that mean for price? Well, in BofA’s view that would be an outcome even scarier than JPMorgan’s, to wit: “If the West cuts off most of Russia’s energy exports it would be a major shock to global markets. Francisco Blanch and team estimate that every unexpected 1mn b/d supply or demand move can result, other things being equal, in a ~$20/bbl move in prices. If most of Russia’s oil exports are cut off, there could be a 5 mn b/d or larger shortfall even if there is some offset from the release of strategic reserves and some increase in OPEC exports. That means oil prices could double from $100/bbl to $200/bbl.”

While one can debate what such hyperinflation in oil would do to public sentiment or support for Western administrations, one thing is clear: it would lead to an almost immediate global recession, if not depression:

For moderate movements in oil prices our rule of thumb suggests sustained $100/bbl higher prices lowers GDP growth in the year ahead by 1% or so. The low number comes from the fact that the US is energy independent (that is, we produce as much energy as we consume). However, history shows that big shocks can have non-linear effects. This is particularly the case if there is sticker shock from record-high gasoline prices. We could see a hit to growth closer to 2%.

It is into this upcoming collapse of GDP that Powell still hopes to hike “six or seven” times this year, which reminds us of another BofA chart: every Fed tightening cycle has ended with a crisis. 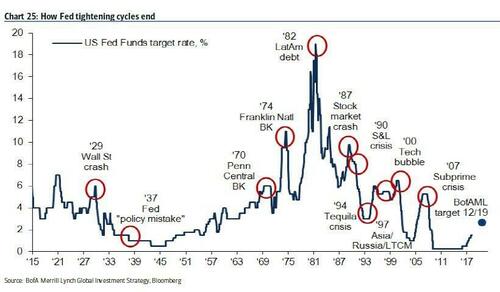 It’s unclear what happens, however, when the world was already in a crisis before the Fed had hiked even once…

All referenced reports available to pro subs in the usual place.