Authored by Kyle Anzalone & Will Porter via The Libertarian Institute,

Ukrainian President Volodymyr Zelensky has voiced frustration with unnamed officials from his own government for speaking with the press. During his daily briefing on Thursday, the Ukrainian leader said leaks were harming Kiev’s war effort and are “frankly irresponsible.”

During the briefing days ago, Zelensky claimed that Ukrainian officials were discussing sensitive internal matters with journalists to boost their egos. “War is definitely not the time for vanity and loud statements,” he said, going on to argue that leaks to the press are setting back Ukraine’s military. 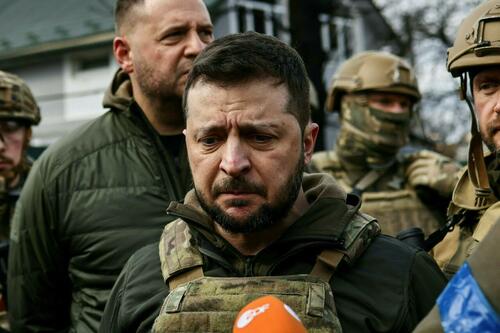 “The fewer details you divulge about our defense plans, the better it will be for the implementation of those defense plans,” the president continued.

Though it is unclear what plans Zelensky believes were revealed to the media, Kiev has been tight-lipped about some of its past operations – namely those on Russian soil – at times declining to confirm or deny reported attacks.

Earlier in the week, an explosion rocked a Russian military base in Crimea, prompting immediate speculation about a Ukrainian strike. One Ukrainian official claimed his government was behind the attack, but Kiev officially denied involvement. Moscow insists the blast was caused by an accident.

Despite his complaints about leaks, however, speculation around the explosion in Crimea was in part fueled by Zelensky himself, who vowed to re-conquer the Russian-controlled region soon after reports of the blast. “Crimea is Ukrainian and we will never give it up,” he told reporters.

Amid repeated denials from both Kiev and Moscow, the full extent of Ukrainian operations within Russian territory remains unknown.

A string of mysterious explosions have erupted at Russian military facilities along the border with Ukraine, however, while the Times recently reported that Ukrainian special operations teams were active inside the country, citing unnamed soldiers and an intelligence official.