Three Pfizer scientists were recorded on undercover video by Project Veritas in the latest installment of their “Covid-19 Vaccine Exposed” series.

In a 10-minute video released Monday night, all three scientists agreed separately conveyed that natural antibodies produced following a Covid-19 infection are superior to the vaccine. 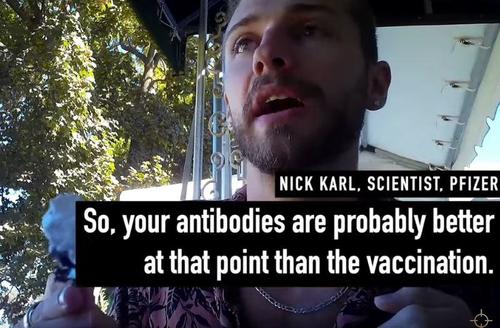 “When somebody is naturally immune — like they got COVID — they probably have more antibodies against the virus…When you actually get the virus, you’re going to start producing antibodies against multiple pieces of the virus…So, your antibodies are probably better at that point than the [COVID] vaccination,” said scientist Nick Karl. “The city [of New York] needs like vax cards and everything. It’s just about making it so inconvenient for unvaccinated people to the point where they’re just like, ‘F*ck it. I’ll get it.’ You know?” he added.

Of note, an Israeli preprint study reported by Science Magazine in late August found that natural immunity after recovering from Covid-19 offers a much better shield against the delta variant than vaccines.

A second Pfizer employee, Senior Associate Scientist Chris Croce echoed Karl – saying that those who have naturally acquired immunity are “probably more” protected vs. the vaccine.

Veritas Journalist: “So, I am well-protected [with antibodies]?”

Croce: “You’re protected most likely for longer since there was a natural response.”

Croce then advises the undercover Veritas journalist to “wait” to get the vaccine until her natural immunity wanes because she’s already had Covid-19.

“We’re bred and taught to be like, ‘vaccine is safer than actually getting COVID.’ Honestly, we had to do so many seminars on this. You have no idea. Like, we have to sit there for hours and hours and listen to like — be like, ‘you cannot talk about this in public,” said Khandke, who also agreed on the antibodies.

“If you have [COVID] antibodies built up, you should be able to prove that you have those built up,” he said.

Croce, meanwhile, acknowledged that Pfizer is conducting tests to determine whether their vaccine causes myocarditis in younger individuals.

“So, yeah, we’re doing, we just sent, like, 3,000 patients’ samples to get tested for like, elevated troponin levels (to detect heart attack) to see if it’s vaccine based – or so…”

What will happen to these truth-tellers who decided to be extremely candid with a Project Veritas journalist?