With the punditry obsessing over the March FOMC meeting, where odds earlier today hit 100% of a 50bps rate hike before easing modestly (and more than 6 hikes for all of 2022)… 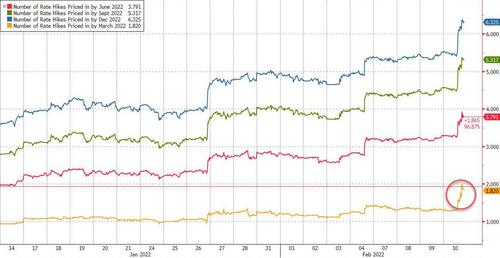 … the real action is in the February Fed funds contract which has spiked to 13bps, suggesting 5bps of tightening relative to the effective Fed funds rate of 0.08%.

Why is this notable? Because the February contract expires on Feb 28, more than two weeks before the March 16 FOMC decision. This means that someone is preparing for an intermeeting rate hike, some time before March. And plugging in the numbers, the 13bps in the Feb contract means that there is now a 30% chance of an emergency rate hike.

Impossible? Not according to Fed watcher and SGH Macro strategist Tim Duy who writes that he would “not be surprised by an intermeeting move either tomorrow Friday or by Monday. I know, this is crazy aggressive.”

Aggressive? yes. Crazy? perhaps – after all the Fed is still buying bonds as part of its ongoing QE which is expected to conclude in late February/early March.

In other words, we may soon face the monetary paradox of the Fed hiking rates even as the Fed is still easing monetary policy through QE, and the biggest joke here – the Fed would be tightening conditions to contain inflation that is almost entirely supply-driven and which the Fed has no control over.

Of course, the Fed has done crazier things – like backstopping the entire corporate bond market and effectively nationalizing it during the peak of the covid crisis. So while we don’t know if the 30% odds of an emergency rate hike are accurate, be on the watch for an emergency Fed declaration tomorrow and Monday at 8:00am ET which is the Fed’s preferred time for unexpected pre-market announcements.