Over the weekend, the world gasped in shock when Western powers announced that the nuclear option would be used against Russia in retaliation for its invasion of Ukraine – sanctions against the country’s central bank and targeted expulsions of key banks from SWIFT, a move which has effectively locked Russia out of the western financial system and left its vast oil export industry – a key lifeline for the Putin regime – in limbo. But the real reason for the shock is that this was the first time the global reserve currency was weaponized against a G20 economy, setting a clear precedent for how the west would and could respond to any other nation that followed in Russia’s footsteps (something which China is clearly contemplating vis-a-vis Taiwan, and is carefully studying just how the west responds to Moscow),

As a result, and following this week’s dramatic freeze of the Russian central bank overseas assets, has prompted some to question just why countries build foreign currency reserves at all and, more broadly, whether the unprecedented western response to Russia hasn’t jeopardized the dollar’s reserve status.

In what one Washington lawyer described to Reuters as the “biggest hammer in the toolshed”, the G7 and European Union governments blocked certain Russian banks’ access to the SWIFT international payment system and also went a step further than many expected by paralyzing about half the Russian central bank’s $630 billion worth of foreign currency and gold reserves. In doing so, the west has undermined Moscow’s ability to defend the ruble – which has lost up to a quarter of its value since Friday alone – and recapitalize sanctioned banks as they face nascent bank runs. In fact, as some admitted, it was the explicit intention of the west to spark bank runs and to crash the Russian financial system from within.

While a huge blow for Russia’s economy, Reuters’ Mike Dolan wrote that the move quickly prompted questions about whether targeting reserve holdings as an act of “economic warfare” may prompt a rethink by reserve managers across the globe – not least in countries that may be at loggerheads or face a potential conflict with U.S. or EU governments – over where to bank their national stash.

It’s a potentially huge issue for world markets given that central bank foreign currency reserves totaled a record $12.83 trillion late last year – a rise of $11 trillion over the past 20 years. This money is held mostly in U.S. and European government bills and bonds – with the U.S. dollar still accounting for almost 60% of that and the euro about 20%. 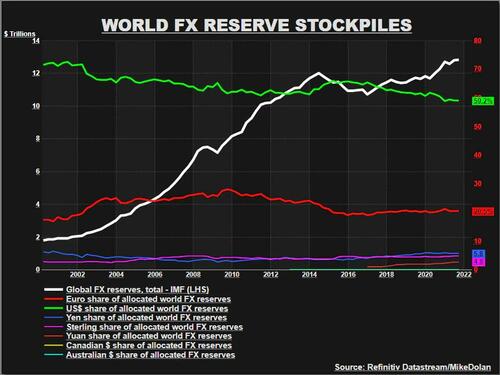 To be sure, Russia has long been aware of the potential risk involved in holding dollars as reserves, and since the annexation of Crimea in 2014, Russia’s central bank had steadily divested its reserves of most U.S. dollar assets. But the dollar, euro and sterling still account for more than 50% of its holdings, located in France, Germany, Japan, Britain, the United States, Canada and Australia. 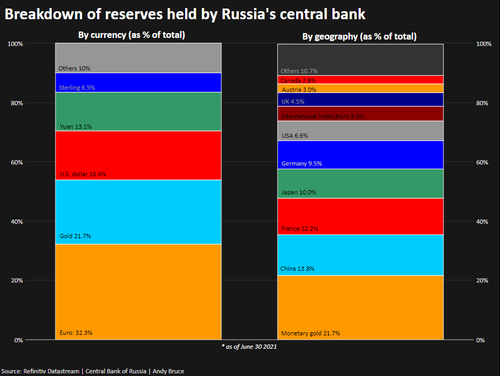 With Moscow and Beijing increasingly allied on the geopolitical stage and China refusing to either condemn the Ukraine invasion or join Western sanctions, China’s yuan – currently accounting for just 2.7% of world reserves – may be one clear option for anxious reserve managers in Moscow or elsewhere.

Of course China itself – for all its fraught relationship with the West – has been the biggest reserve stockpiler since it joined the global trading system 20 years ago amid tight control of its exchange rate. More than $3 trillion of its $3.22 trillion hoard was amassed since 2000 – precisely to offset foreign inflows to keep a lid on the yuan.

But is that about to change, and did western sanctions against Russia marked the beginning of the end of the dollar as the world’s reserve currency?

Berkeley professor and expert on world reserve management Barry Eichengreen reckons that of the two imperatives behind reserve stockpiling – to intervene or stabilize domestic markets or as a war chest against shocks, disasters or balance of payments crises – the latter may now be in question. “The main effect may be declining demand for reserves,” he said.

“If countries see reserves and foreign exchange management as less useful and available, then they will have to accept the inevitability of that their exchange rates are likely to move by more,” Eichengreen added. “In which case they need harden their financial systems and economies against exchange rate related disruptions, for example by discouraging corporates from borrowing in foreign currency.”

That in itself could have a profound impact on world markets and on the model for emerging markets and developing economies.

An even more alarming take comes from former Goldman economist Jim O’Neill who said the Western sanctions could ultimately lead to major reform of the global system.

“Amongst the fallout some countries may see less need to accumulate FX reserves,” he said, adding that could indeed seed “peak reserves” worldwide. “It might (also) make some of the bigger emerging markets think more seriously about reform and opening up their domestic markets, liberalizing and moving away from the U.S-centric system.”

But the most surprising take comes from former NY Fed staffer, current repo guru and Credit Suisse money market guru Zoltan Pozsar – who on any other day would be a stalwart advocate of the status quo – and who ominously said that the response to Russia may have set off a sequence of events in motion that eventually leads to the demise of the dollar as the reserve currency.

Speaking to Bloomberg, Pozsar – who this weekend warned that the lockout of Russia from the global financial system could prompt central banks to aggressively pump liquidity to stabilize markets – said noted that wars tend to turn into major junctures for global currencies, and with Russia losing access to its foreign currency reserves, a message has been sent to all countries that they can’t count on these money stashes to actually be theirs in the event of tension.

As such, he echoes the opinions voiced above that it may make less and less sense for global reserve managers to hold dollars for safety, as they could be taken away right when they’re most needed.

Of course, Russia wasn’t the first country to learn the hard way that dollar reserves can be weaponized at a moment’s notice. Last year, the Biden administration’s move to seize Afghanistan’s cash assets and confiscate the country’s gold held at the NY Fed to prevent access by the Taliban, was another such signal that reserves can be frozen.

Pozsar, similar to O’Neill, argues that this recognition will encourage central banks to diversify away from the dollar, or try to re-anchor their currencies to assets that are less susceptible to influence from U.S. or European governments. As such, recent tensions could usher in a new monetary order in which countries are far less interconnected through international bank accounts and reserves.

Speaking to the Odd Lots podcast, Pozsar said that “most FX reserves that exist in the world today are all forms of inside money, i.e. they are the liabilities of someone.” As a quick reminder, and as we explained over the weekend, central bank deposits, bank deposits, and securities are all “inside money” – money and money-like claims that are someone else’s liability, and it’s situations like this when “outside money”, or money claims like gold bullion that are no one’s liability, is king, especially if stored in vaults domestically. Unlike balances at the Deutsche Bundesbank, western G-SIBs, or Euroclear, you control what you have.

Echoing what he said over the weekend, Pozsar told Bloomberg that “whether you hold the sovereign debt of a country, or you keep a deposit at a central bank of a foreign country, or if you keep deposits at Western financial institutions, these are all forms of inside money that you don’t control. Someone owes it to you. And these things can be sanctioned.”

“If a central bank is in a situation like this and the currency’s under pressure, would it ever come to having to re-anchor your currency to something? Like gold? I think these are all questions that should be top of mind,” he added, forgetting to mention bitcoin and other cryptos, which an entire generation now views as digital gold.

“I don’t know if it’ll come to that, but if things get worse, you could basically re-anchor the ruble to a pile of gold because you need an anchor in situations like this”, he said, echoing what we have said for years, namely that in case Russia wanted to truly extricate itself from the current “dollar reserve” world, it should unveil a gold-backed currency, one which is co-sponsored by the Chinese yuan, which would then also announce unveil it is becoming gold-backed.

Others also share this dismal view: a few days ago, former Societe Generale strategist Dylan Grice who since founded Calderwood Capital, described the recent moves as a “weaponization” of money. “You only get to play the card once,” he tweeted. “China will make it a priority to need no USD before going for Taiwan. It’s a turning point in monetary history.”

never seen weaponization of money on this scale before…you only get to play the card once. china will make it a priority to need no USD before going for Taiwan. it’s a turning point in monetary history: the end of USD hegemony & the acceleration towards a bipolar monetary order

“It’s a very long-term thing, so nothing immediate or even say on a two- to three-year basis, but if what we are seeing is a demonstration of the power of economic and financial force, the logical response if there is a risk that you will be on the receiving end is to see what you can do to immunize yourself,” he said. “Weirdly enough there may be a second response – what essentially is your potential economic foe importing from you and what can you do to have the maximum impact on their economy and least on yours.”

Of course, none of this is a surprise to Russia, which has been feverishly rotating out of its “inside money” dollar reserves, including dumping off all of its U.S. Treasuries in 2018 according to official data, and amassing a record stockpile of gold in the process. In fact, as Pozsar noted over the weekend, “the Bank of Russia now has more gold than deposits at foreign central banks!”

But while a growing number of countries, especially those that remain ideologically aligned with Russia like China and India, may seek to quietly – and not so quietly – rotate out of the dollar, they face another problem: they’ll need to convert those trillions in dollars into something, and for now the pool of potential suitable assets remains limited. Then again, if one wishes to avoid the fiat system entirely – since within the system every single asset is someone else’s liability and vice versa – one would need to seek refuge outside, i.e., in a non-fiat assets.

Here gold is the most obvious candidate, although as Bloomberg notes, there’s only so much of it available, which of course is a narrow view – after all, all that would need to happen is for gold to be revalued to make it worth far more. Incidentally, it was none other than a Pimco economic who back in 2016 suggested that in order to save the economy and devalue the dollar, the Fed should buy gold.

Failing that, the US government can just confiscate all the existing physical gold and devalue the dollar against it, similar to what FDR did with the infamous executive order 6102.

So will the Fed start buying gold in the open market? We doubt it… but just as attention is now turning to “regulating” (read banning) cryptos to avoid Russian oligarchs from using to to bypass sanctions, it stands to reason that the next trigger point as the fiat system continues along its relentless path to terminal disintegration, will be a confiscation of all precious metals. It’s only a matter of time.