I don’t know what the set of prerequisites should be for appointing an “anti-Semitism envoy,” but here’s one I’m pretty sure should be on the list: didn’t compare Donald Trump or the United States under the Trump administration to Nazi Germany.

Despite several instances where Lipstadt made inappropriate comparisons between the former president and the most evil man of the 20th century — and despite having called a member of the Republican caucus in the Senate a “white nationalist” — she was confirmed by unanimous consent on Wednesday, according to the Daily Caller, ending one of the more controversial nomination fights of Biden’s administration.

(At The Western Journal, we’ll continue to keep you informed about President Biden’s far-left federal nominees — and how they’re hurting America. You can help us bring readers the truth by subscribing.)

Lipstadt, 75, is a historian who taught at Emory University and has studied anti-Semitism and the Holocaust, having authored several books on the subject.

The position to which she was nominated, according to the State Department’s website, “advances U.S. foreign policy on antisemitism… [and] develops and implements policies and projects to support efforts to combat antisemitism.” Ordinarily, she’d be a slam dunk.

However, during the Trump years, Lipstadt had issues keeping her Trump derangement syndrome in check — leading Republicans to hold up her nomination.

The first worrisome set of remarks came in September of 2020, when a group called the Jewish Democratic Council of America released a controversial split-screen ad which showed the former president on one side and anti-Semitic images — including many from Nazi Germany — on the other.

“History shows us what happens when leaders use hatred and nationalism to divide their people,” intoned the narrator in the ad.

While most mainstream Jewish groups opposed the ad — including the Anti-Defamation League, certainly not a conservative organization — Lipstadt defended it.

“I would say in the attacks we’re seeing on the press, the courts, academic institutions, elected officials and even, and most chillingly, the electoral process, that this deserves comparison,” Lipstadt told the Jewish Standard.

“It’s again showing how the public’s hatred can be whipped up against Jews. Had the ad contained imagery of the Shoah, I wouldn’t be here today.”

The Jewish Standard noted that this hadn’t been her position in the past: “When you take these terrible moments in our history, and you use it for contemporary purposes in order to fulfill your political objectives, you mangle history, you trample on it,” she said in 2011.

Her response? She wasn’t necessarily saying the Trump administration was exactly Nazi-ruled Germany, but perhaps it was more like Germany just before the Nazis took over.

This hair-splitting logic didn’t exactly hold when one considers the ad she was defending was openly inviting comparisons between Trump and Nazi Germany, not telling America that it was Jan. 15, 1933.

Around the same time, she also defended then-candidate Biden’s comparison between Trump and Nazi propaganda minister Josef Goebbels in a tweet. 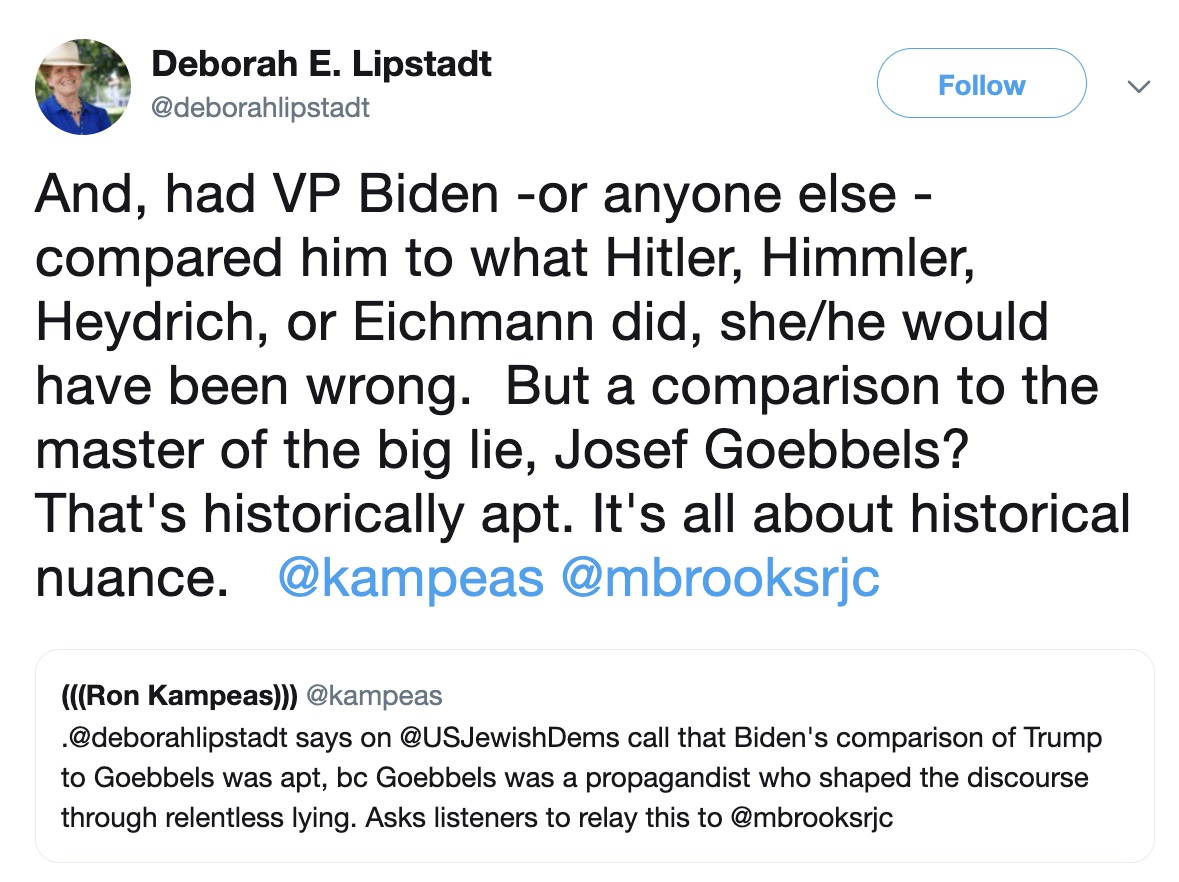 She had limits, though: “had VP Biden -or anyone else- compared him to what Hitler, Himmler, Heydrich, or Eichmann did, she/he would have been wrong. But a comparison to the master of the big lie, Josef Goebbels? That’s historically apt. It’s all about historical nuance.”

That tweet has since been deleted for reasons you can probably imagine.

It wasn’t just Trump/Nazi comparisons that troubled Senate Republicans. In March, a few months before her August nomination, she retweeted a Haaretz story about GOP Sen. Ron Johnson’s remarks that he wasn’t afraid during the Capitol riot, adding that he might have been worried had he been caught in the midst of a Black Lives Matter or antifa riot.

“This is white supremacy/nationalism. Pure and simple,” Lipstadt said in the tweet.

This led to a confrontation with Johnson during her confirmation hearings.

“Isn’t that about as serious and vile an accusation as you can hurl against somebody? Somebody you don’t even know. You’ve never talked to me. You’ve never met me. You don’t know what’s in my heart, do you?”

“As I said earlier, it was not nuanced. I would not do diplomacy by tweet,” Lipstadt said.

Well, one hopes. For better or ill, we now have an anti-Semitism envoy who has defended comparisons between Trump and the Nazis, a move that cheapens anti-Semitic atrocities no matter what her hair-splitting logic behind uttering them was.

One hopes she’s learned. But then, one would have also hoped Joe Biden wouldn’t have nominated her for the position in the first place, and look where that got us.

Via      The Western Journal