After European nations imported the most gas from Russian sources yesterday in months, scrambling to stock up on supplies as Russian President Vladimir Putin’s deadline to either pay for gas in rubles (or be cut off) came and went, Russian gas giant Gazprom has officially halted all deliveries to Europe via the Yamal-Europe pipeline, a critical artery for European energy supplies.

Instead of flowing toward Germany and the EU, gas supplies on Friday and Saturday started flowing in the opposite direction, according to Gascade, the network operator.

In recent months, the EU has already boosted imports of LNG from the US… 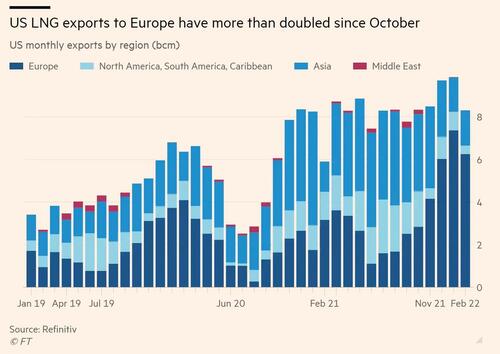 …and despite President Biden’s promise to bolster to exports to the EU (although he stipulated that not all of this additional capacity would come from the US), researchers at Goldman Sachs have already shown that US exports of LNG are already at capacity.

Another problem for pipeline-dependent Europe: the continent presently doesn’t have the infrastructure to allow it to rapidly ramp up imports of LNG, which must be carefully processed and “regassified” before it can be distributed to utilities and other distributors of energy.

A map below illustrates the level of dependence that various European economies have on Russia. 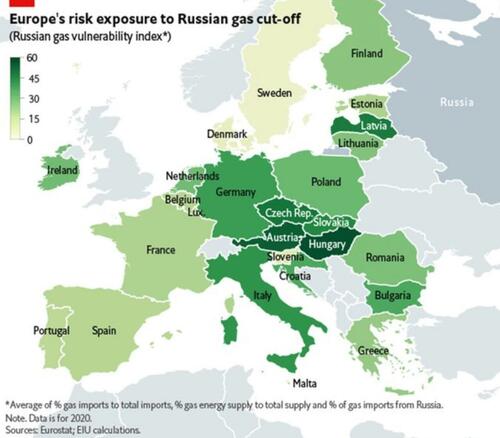 But it’s not just the Germans who must now make due without Russian gas supplies. British energy major Shell is being cut off from Russian supplies in response to the UK’s economic sanctions on Russia, said Dmitry Peskov, the press secretary of Russian President Vladimir Putin.

“London wants to be the leader of everything anti-Russian. It even wants to be ahead of Washington! That’s the cost!” Peskov outlined.

So far, the UK is the only country to have imposed sanctions on Russia’s Gazprombank, through which payments for Russian natural gas are made. The measure effectively denies Britain the ability to pay for the commodity, and has forced Gazprom to walk away from the sales and trading arm. In accordance with Putin’s decree that Russian gas be paid for in rubles, Gazprom has set up foreign-currency accounts for customers where their currencies can be converted into rubles on the Moscow exchange.

Now that Putin is turning up the pressure, the European nations have a difficult choice ahead: either they can play ball and demonstrate to the world that their efforts to wean themselves off of their dependence on Russian energy have been mostly in vain. Or they can face a “catastrophic” economic crisis as energy prices soar, leading to rationing, blackouts and other measures that will make the 1970s oil crisis in the US look like child’s play.