Update (13:15 ET): What was largely a theoretical modeling exercise until moments ago, is set to go live because Reuters reports that the EU is set to declare a full embargo on Russian oil after this weekend’s French election:

More below (and in the full JPM report available to pro subs).

Despite the clear intentions of western government to cripple Russian energy production, loadings of Russian oil have so far been surprisingly resilient, so much so that Russia’s current account balance is at all time highs.

According to JPMorgan, shipments in the seven days to April 16 hit 7.3 mbd, only 330 kbd below the 7.58 mbd averaged in
February before the start of the war. Remarkably, JPM calculates that Russian crude exports are averaging 360 kbd above pre-invasion volumes, while exports of oil products like fuel oil, naphtha, and VGO have declined by 700 kbd (full report available to pro subscribers in the usual place). 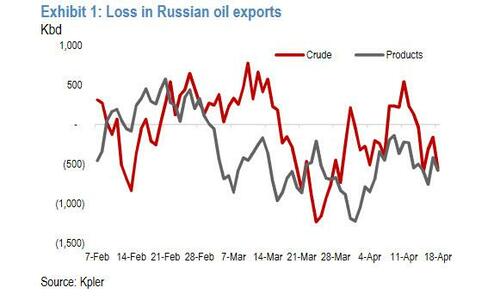 As previously observed, the decline in product exports combined with a 200 kbd drop in Russian domestic oil demand has resulted in Russian refineries cutting runs. The volume of refining cuts in April has risen to 1.3 mbd, almost 0.6 mbd above usual April maintenance. By late March, a sharp reduction in domestic refining throughput triggered production shut-ins.

With that in mind, JPM now estimates that Russian production shut-ins will amount to 1.5 mbd in April, vs its initial forecast of 2 mbd (the forecast of a 1 mbd loss of Russian exports for the rest of the year remains unchanged for now).

Underlying JPM’s projection is the assumption that European buyers will cut their purchases of Russian oil by about 2.0-2.5 mbd by the end of the year and that Russia will be able to re-route only about 1 mbd out of that. 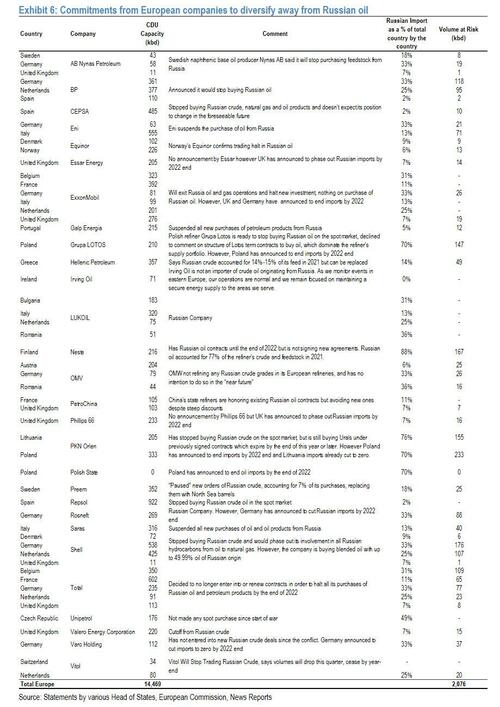 Of course, it will come as no surprise to anyone that aggressive purchases of Russian oil by China and India – who have both ramped up purchases of Russian oil in the past two months, and Turkey has also increased volumes to pre-COVID levels – have offset some of the loss. Given time, JPM estimates that together these three countries can likely import an additional 1 mbd beyond what they are importing today.

Which brings us to the big question: if Europe follows through on its warning to expand sanctions to all Russian oil, what happens to the price? Well, according to JPMorgan, nothing good.

As JPM’s commodity strategist Natasha Kaneva writes, she has reviewed various scenarios should Europe expand its sanctions to include Russian oil, and warns that “any immediate embargo measure taken by the European Commission will have a severe impact on the global oil market with risks to price entirely to the upside in the short-term.”

The bank has examined three potential tools the EU could use to sanction Russian oil, from the most aggressive, a full embargo on imports from Russia, to the more conservative, taxes or price caps on Russia oil imports. In any scenario, to avoid the extreme price spikes, the market needs time to adjust.

A look at the various scenarios, starting with the most draconian:

Some more details on the “full embargo” scenario:

Though India has already increased its imports of Russian oil to three times 2021 levels, its ability to continue to act as a sink for displaced Russian oil supply remains in question as the US warns India not to increase imports further.

The EU is also entertaining less drastic alternatives to a full embargo which would allow Europe to continue to receive Russian oil supply while still applying financial pressure on Moscow. These alternatives include introducing i) special taxes and ii) price caps on European imports of Russian oil.

In any of these scenarios, it is obvious that Russia will turn to friendlier buyers for its exports of crude oil and oil products. China and India have both already ramped up purchases of Russian oil in the past two months and Turkey has also continued to ramp up purchases of Russian oil toward pre-COVID levels in spite of the conflict in Ukraine.

Together, these three countries can likely import an additional 1 mbd beyond what they are importing today, with China replacing other East Asia buyers of oil from Eastern Russia like Japan and Korea and Turkey and India picking up cargoes of Russian oil from the Black Sea and Baltic ports opportunistically. 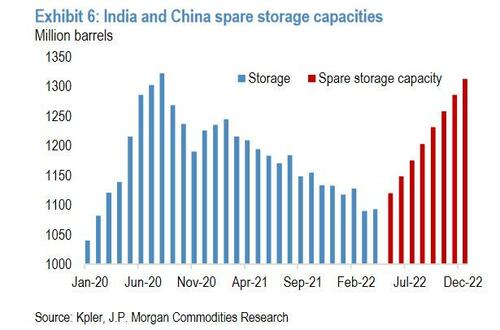