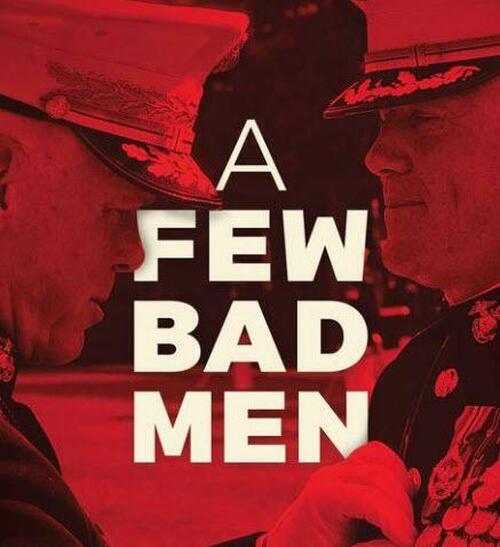 My new book, A Few Bad Men, details the mendacity and mad dishonesty of retired Marine General James “Mad Dog” Mattis. The fact that it was written by a Marine once under his command, whom he betrayed for the sake of politics and getting to slap on another star, says volumes about this once-lionized figure.

It all goes back to an incident in Afghanistan in 2007, and the Court of Inquiry trial of innocent Marines that followed, which Mattis himself instigated.

Lt. Colonel Steve Morgan, USMC (retired) and jury member of the 2008 Marine Special Operations Command’s Court of Inquiry says in the foreword to A Few Bad Men, “This is a case of a perfect storm of toxic leadership.”

The most legendary Marine of all time, Lieutenant General John A. Lejeune, the 13th commandant of the Marine Corps, laid out clearly how to effectively nurture and lead Marines:

“Make every effort by means of historical, educational, and patriotic addresses to cultivate in their hearts a deep abiding love of the Corps and Country” and “the key to combat effectiveness is unity and esprit that characterizes itself in complete irrevocable mutual trust.”

If only General Mattis had taken this to heart.

On February 3, 2005, when Lieutenant General Mattis was attending the Armed Forces Communications and Electronic Associations forum in San Diego, he said: “You go into Afghanistan, you got guys who slap women around for five years because they didn’t wear a veil. You know, guys like that ain’t got no manhood left anyway. So it’s a hell of a lot of fun to shoot them. It’s fun to shoot some people. I’ll be right up there with you. I like brawling.”

He also likes hearing the sound of his own voice.

During this same time, Mattis partnered with General David Petraeus to develop the joint counterinsurgency doctrine of winning hearts and minds. Mattis hijacked the phrase from the Hippocratic oath for his Marines to follow, “First do no harm.” This sounded good to the media and politicians in Washington, but Marines are not physicians and Afghanistan was no sterile operating room. It was a hellscape in which Marines constantly faced threats and the possibility of betrayal from 360 degrees. Mattis’ Marine Hippocratic oath sent mixed signals for his Marines, who had it on his good authority that “It’s a hell of a lot of fun to shoot . . . some people.”

Just over two years later, I led the First Marine Special Operations Task Force. We landed in Afghanistan on February 12, 2007. Before long the First was involved in a complex ambush near the Afghanistan-Pakistan border, on March 4, 2007. We were attacked by a suicide car-bomb, waves of Taliban fighters on both sides of the road, a sniper, and a mob that placed an obstacle to trap us in an ambush kill box. We  successfully counterattacked, killed the Taliban terrorists, avoided civilian casualties, and returned to base within 20 minutes, where we learned of the Taliban’s swift information operations campaign that was already underway, accusing us of mass-murdering Afghan civilians. The Taliban’s version of events went out within 20 minutes through the BBC followed by countless others. Ultimately, the president of Afghanistan, Hamid Karzai, condemned our actions and the Army generals kicked us out of Afghanistan within five days. Crushing the Taliban in battle morphed into a PR victory for the extremists in the media and a weakening of the allied forces in country. Due process went right out the window.

Ironically, Mattis was assigned as the convening authority by the commandant of the Marine Corps in August 2007, to be responsible for the investigation and a Court of Inquiry into our March 4 battle. Mattis received the results of my polygraph test and the sworn testimony of all the Marines involved in the firefight, confirming that on that morning no Marines said they killed any civilians or saw any civilians killed.

Unlike Lejeune’s comments of “cultivating a deep abiding love of Country and Corps in the hearts of your Marines and that the key to combat effectiveness is unity and esprit that characterizes itself in complete irrevocable mutual trust,” Mattis unleashed an unprecedented 45 criminal investigators and four prosecuting attorneys against the seven Marines falsely accused by the Taliban of mass murder. It would become the longest war crimes trial in Marine Corps history.

Mattis placed a “protective order” (a.k.a. gag order) prohibiting the two Marine officers who he named as codefendants from making any statements to the press or face punishment. Our attorneys would face disbarment. The already unlevel playing field was tilted hard against the Marines who had won a battlefield victory under fire.

Additionally, Mattis’ prosecution team found perceived vulnerabilities in the Marine commandos and commenced “ethnic targeting” of two Hispanic Marines. Mad Dog’s prosecutors continuously interrogated one of them, and the government manufactured a statement from him that our fire was out of control during the March 4 ambush.

Mattis turned the prosecution over to his successor in the fall of 2007 as he received his promotion with a fourth star. The following year, the trial acquitted all of us. No thanks to Mad Dog Mattis. He got his star. A few bad prosecutors under his watch cost the Marines a few good men, and diminished America’s position in Afghanistan at a time when that war might still have been won.

Mattis went on to serve as the commander of all U.S. Forces in the Middle East at U.S. Central Command in Tampa, Florida. As I detail in A Few Bad Men, there he came under the influence of Elizabeth Holmes, founder and CEO of Theranos. Holmes had a device she claimed could detect all kinds of disease in a few drops of blood. It would change the world, if it worked. Holmes contacted Mattis in August 2012 and wrote Pentagon officials requesting, “How do we overcome this new obstacle? I have tried to get this device tested in theater asap, legally and ethically. This appears to be relatively straight-forward yet we’re a year into this and not yet deployed.”

The main problem Mattis was willing to overlook was that the FDA had not approved Theranos’ blood testing technology to be used on our troops in Afghanistan, but Mattis was hoping he could push it through, right or wrong.

Mattis retired and went on to make a fortune serving on four corporate boards, including Theranos and military contractor General Dynamics. Theranos’ technology would not only be denied FDA approval, but it was proven to be a fraud. During the Elizabeth Holmes trial, Mattis, who had served as a Theranos board member for several years, testified that he was unaware of any of Theranos’ scandalous actions. This seems unlikely, given Mad Dog’s legendary tenacity, and the fact that he had a fiduciary duty to know what was going on.

Holmes’ device never worked. She is now a convicted fraudster. Was Mattis her gullible mark or a greedy participant?

Mattis’ disgraceful actions are laid bare in A Few Bad Men. He used his position as secretary of defense to bottle up the Freedom of Information Act requests to get our testimony in that March 4, 2007 ambush exposed. Our shocking testimonies have now been released and tell a terrible story of betrayal by a Marine against other Marines. They reveal why the Pentagon’s top-brass generals who burned the careers of subordinates but then pivoted to lucrative careers with every defense contracting company lost their forever war in Afghanistan, and really, haven’t won a war in decades.

Major Fred Galvin (USMC-Ret), author of A Few Bad Men: The True Story of U.S. Marines Ambushed in Afghanistan and Betrayed in America.