Update(1524ET): While the White House and European allies, along with the Ukrainian government, were lock-step in condemning as outrageous a series of reported Russian airstrikes on the port of Odesa the morning after the grain export deal was signed in Istanbul, the Kremlin is apparently denying it was behind the attack:

Turkey’s defense minister said on Saturday that Russian officials had told Ankara that Moscow had “nothing to do” with strikes on Ukraine’s Odesa port.

“In our contact with Russia, the Russians told us that they had absolutely nothing to do with this attack and that they were examining the issue very closely and in detail,” Defence Minister Hulusai Akar said in a statement.

“The fact that such an incident took place right after the agreement we made yesterday really worried us,” he added.

Ukraine for its part, has said it is still preparing agricultural exports despite the threat of more strikes. Key infrastructure at Odesa port was not damaged, according to local officials.

The EU joined the US in blaming Russia and condemning the attack, with Ukraine’s President Zelensky accusing Moscow of deliberately trying to thwart the deal it just signed.

UN Secretary-General António Guterres has condemned a fresh missile attack on the key Ukrainian port of Odessa on Saturday, which came a mere hours after a major UN-brokered Russia-Ukraine deal was reached to unblock Ukrainian grain export transit. Western media and officials are widely calling it a continued deliberate attack on Ukraine’s vital grain export infrastructure by Russia, despite the signed breakthrough agreement in Istanbul the evening prior.

“The secretary-general unequivocally condemns reported strikes today in the Ukrainian port of Odesa,” Farhan Haq, deputy spokesman for U.N. Secretary-General António Guterres said following the strikes, some of which were captured on video…

The UN statement, however, stopped short of assigning blame or that the attack violated the grain export deal agreed to by Russia.

“The enemy attacked the Odesa sea trade port with Kalibr cruise missiles; 2 missiles were shot down by air defense forces; 2 hit the infrastructure of the port,” the Operational Command South wrote on Telegram on Saturday.

The UN’sHaq continued, “Yesterday, all parties made clear commitments on the global stage to ensure the safe movement of Ukrainian grain and related products to global markets,” adding that “These products are desperately needed to address the global food crisis and ease the suffering of millions of people in need around the globe. Full implementation by the Russian Federation, Ukraine, and Türkiye is imperative.”

And The New York Times weighed in on whether this will collapse the deal even before it gets off the ground: “Russia may not have technically violated the deal, since it did not pledge to avoid attacking the parts of the Ukrainian ports that are not directly used for the grain exports, according to a senior U.N. official.”

The two sides inked what Kiev was eager to stress were separate but “mirror” agreements with the UN. The Ukrainian government has said will not negotiate directly with the Russian side until all its national territory is returned. There were not even photo ops involving Russian and Ukrainian officials in the same vicinity in the same room. 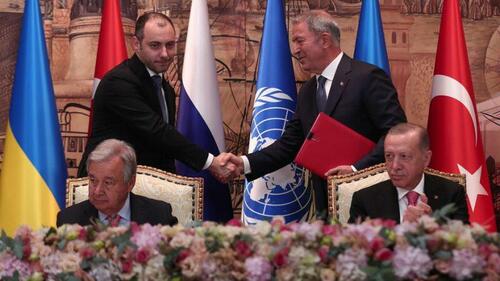 Guterres said, “Today, there is a beacon on the Black Sea — a beacon of hope, a beacon of possibility, a beacon of relief” – as over 20 million tons of grain which especially a number of Mideast and African nations are heavily reliant upon are expected to be released.

Ukrainian Infrastructure Minister Oleksandr Kubrakov later in the day said there was not significant damage from the Russian strikes, and announced, “We continue technical preparations for the launch of exports of agricultural products from our ports.”