Sen. Joe Manchin (D-WV) dispelled any rumors that he’s ‘on board‘ with Democrats’ Build Back Better Act, despite its new $1.75 trillion topline set by the White House (down from $3.5 trillion). 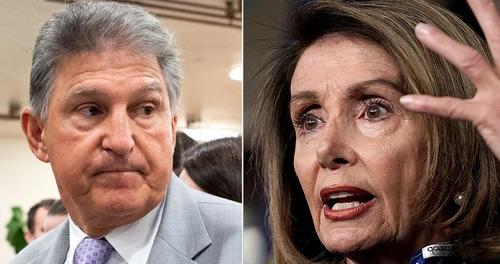 On Monday, Manchin held a seven-minute press conference to set the record straight. The key takeaway is this; nothing is happening on the reconciliation bill until the bipartisan infrastructure bill is passed by the House, and more clarity is provided in general.

“To be clear, I will not support the reconciliation legislation without knowing how the bill would impact our debt and our economy in our country we won’t know that until we work through the text,” he said, adding “It is time to vote” on bipartisan infrastructure package.”

In response to House Speaker Nancy Pelosi’s rumored plan to appease progressives by forcing both bills through at once, Manchin insisted that “Hiding this bill hostage is not going to work for getting in support for the reconciliation bill,” adding that he “will not support a bill that is this consequential.”

“Enough is enough,” he continued. “While I’ve worked hard to find a path to compromise, it’s obvious: compromise is not good enough for a lot of my colleagues in Congress. It’s all or nothing.”

Last week, Pelosi had planned to hold a vote on just the $1.2 trillion infrastructure bill – only to be sidelined by House progressives.

“Both bills pass together — and when the full legislative text of the popular Build Back Better Act is ready and agreed to, we’ll be thrilled to pass the President’s entire agena [sic],” tweeted Congressional Progressive Caucus leader Pramila Jayapal (D-WA) on Friday.

Jayapal’s comments followed a “great meeting” with Sen Kyrsten Sinema (D-AZ), one of two moderate Democrats who have insisted on a slimmed down Build Back Better bill, which started out at $3.5 trillion and now sits at $1.75, per the White House.

Then, on Sunday, the Washington Times reported a rumor that Pelosi was planning to hold votes on both massive spending packages this week, which would mean both Manchin and the Progressives overcame their longstanding obstacles to moving forward.